Allergy sufferers are being forced to travel interstate to receive treatment because of a lack of public health services in Tasmania.

The state currently does not have any public immunologists.

The problem has prompted health professionals to call on the State Government to establish a statewide allergy service.

Tasmania is the only state without a specialist allergy service to coordinate immunology cases and parents and health experts are urging the Government to act to prevent patients suffering more than they need to.

“There’s huge issues of equity in terms of allergy and immunology service,” he said.

“We’re the only state that doesn’t have it so people in Tassie get a real raw deal compared to the rest of the country.”

Dr Turner said public doctors in Tasmania were not adequately qualified to be looking after allergy patients.

“They feel out of their depth and they don’t feel they have someone to turn to to ask for advice,” he said.

The Tasmanian Health Service said in a statement that it was working to deliver better care and has set up a clinical advisory group to drive reform.

But as chair of that group, Dr Turner was disappointed by the Government’s response in its recent health white paper.

“It was very disappointing to be the only clinical advisory group that made a submission and not receive any recognition,” he said.

Keli Pearn and her nine-year-old-son Ryan travel to Melbourne each year, but it is not for a holiday, it is because Ryan needs treatment for food allergies.

He can not get the treatment in Tasmania as a public patient, and Keli said he had been put through undue illness as a result.

“I think that he got far sicker than he ever needed to in the diagnosis process,” she said.

“And if the services had have been available locally it all would have been dealt with a lot more quickly and efficiently.”

Ms Pearn said that although Ryan’s allergies were now under control, she worried about what would happen if he suddenly got sick.

“Obviously we haven’t got that option of ringing up and saying, ‘Hey this has changed with him, can we pop in?’,” she said.

“It’s quite daunting having to take a child on an aeroplane who cannot take their medication prior to their testing.

“And often the allergens are served within the flight so it’s very hard to have a controlled environment.”

Health system needs to ‘step up’

Currently there are two private immunologists in Tasmania, but no public allergy specialists.

Nationally, hospital admissions for anaphylaxis have increased four-fold in the past 20 years.

Roughly 20 per cent of Australian adults have at least one allergic disease, that figure is tipped to rise to 25 per cent by 2050.

“My hope is that Tasmania’s not waiting for a fatality or a catastrophe,” she said.

“Currently you’ve got a handful of doctors who are doing the best they can without the support of the health system.

“Tasmania needs to step up to the plate.” 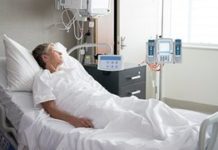