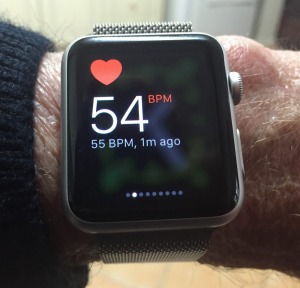 It was a Friday, about a month ago. I woke up feeling a bit odd; nothing that felt serious, just a slight lack of focus and a little discomfort in my upper body – maybe too much sticky date pudding last night. A cup of tea will fix it, I told myself.

I strapped on my Apple Watch and unlocked the iPhone 6, filled the kettle and set it going. And then, for no particular reason, I felt for my pulse on my right wrist. The beat wasn’t right: two regular thumps and then three or four in rapid succession, almost a buzz instead of a beat.

Aware now that something wasn’t right, I tapped the Watch and swiped up to bring up the Heart Rate Glance app. It showed 50 beats a minute, a bit slow perhaps. I tapped it again. This time it showed 150 beats  a minute! Not good. I opened Cardio, the heart rate app, on my iPhone, and got the same result. Then to the Health app on the iPhone, where the health and fitness data from the watch is displayed on a dashboard. It showed irregularity, with spiking of between 120 and 150 beats a minute. 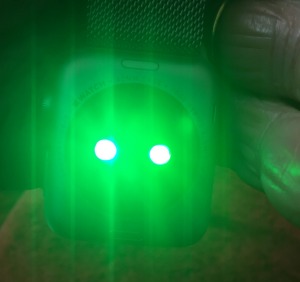 The watch uses its green LEDs paired with light-sensitive photodiodes to detect blood flow through your wrist. The blurring is caused by the very fast oscillation of the LED sensors.

I phoned my doctor, who suggested I get to his rooms immediately if not sooner. He checked my pulse and blood pressure, grimaced and phoned for an ambulance. Thirty minutes later I was in the emergency department at Knox Private Hospital and soon after admitted to the cardiac unit for observation and treatment of atrial fibrillation (the erratic heartbeat) followed by an angiogram. Next day a stent was installed in a fairly well-blocked artery, a problem of which I had previously been no more aware than I was of the fibrillation.

In short, the Apple Watch and the healthcare apps on it and the iPhone probably saved my life or, at least, saved me from partial paralysis from a stroke.

Atrial fibrillation is the result of a malfunction in the electrical system controlling the heart. It can occur without being noticed and can sort itself out without medical intervention. It can be treated with drugs or by an electrical charge administered by a specialist. After correction it may return without notice. It is insidious in that in even fairly extreme cases such as mine its seriousness is not readily apparent.

My blocked artery could have produced a heart attack, but the danger of fibrillation is stroke. A fibrillating heart does not properly clear oxygenated blood from its left atrium to the ventricle below and then on to the brain and elsewhere. Clots can form and be carried to the brain and cause strokes.

Without the watch’s alert I would probably have ignored it, putting it down to indigestion or a glass too much of that Barossa product. I didn’t feel sick, just a bit off-colour, but in fact I was at serious risk.

My cardiologist said probably one in 10 adult Australians have experienced some degree of fibrillation without being aware of it. The Bureau of Statistics reports that in 2010 more than 11,000 Australians died of stroke and that in the same year it was associated with a further 21,000 deaths.

I spent a week in the cardiac ward, was prescribed a lot of pills, and made fully aware that I needed to pay attention to my blood-pumping system. I have changed my diet to minimise cholesterol and reduce my weight, I take a 40-minute walk every day, ride a bike at the weekend, limit consumption of the Barossa product and regularly check my activity on the watch and iPhone.

Four sensors on the underside of the watch collect heart-rate information using a technology called photoplethysmography. Two sensors are green and infrared LEDs. The other two are photodiodes?. Blood is red because it reflects red light but absorbs green light. The watch uses its green LEDs paired with the light-sensitive photodiodes? to detect blood flow through your wrist. Blood volume is greater when your heart beats and absorption of green light is greater. The LEDs flash hundreds of times a second, allowing the watch to calculate your heart rate.

Heart monitoring is only one of many ways Apple Watch can measure one’s condition. The accelerometer measures movement and the GPS gives the distances travelled on a, say, bike. Cold weather and skin conditions – tattoos, for instance – can impede accuracy. But to use external heart monitors strapped to your chest the watch reads by Bluetooth.

Finally, while I think it’s important not to become an obsessed hypochondriac, I feel happier now that my watch and its buddy the iPhone are at the heart of the matter.

Smartphones not so smart with urgent medical questions