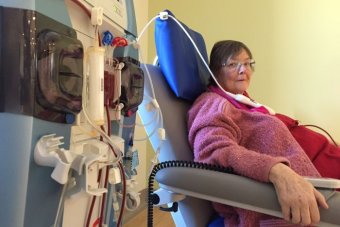 Treatment options for kidney dialysis patients in the ACT have been undergoing a major overhaul, following a spike in the number of people with high-level care needs.

There are also more improvements in the pipeline, with plans to offer patients access to a broad range of specialists in the community health centres where they dialyse.

ACT Health’s director of renal services Dr Girish Talaulikar said the number of people who needed dialysis in the ACT was increasing every year and it was a trend that was set to continue.

“We’re experiencing a growth rate of about 3 or 4 per cent every year,” he said.

“It’s not just that the patients are increasing, but … we’re treating them better so they’re living longer.

“So that means that the total patient numbers are likely to keep increasing in the foreseeable future.”

In response, since 2007, the Health Directorate has been re-designing the way services are delivered, in order to give patients more options for dialysing, at a time and place that best suits their needs.

For dialysis patients, a large part of each week is spent hooked up to a machine that removes waste from the blood.

In the past, that meant regular visits to hospital – but that is not the case anymore in the ACT. 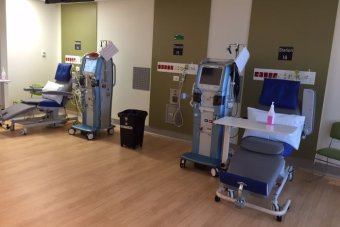 Dr Talaulikarthere said there were plans to make 12 of the stations at Belconnen available for nocturnal dialysis.

The nocturnal service will complement an existing 24-hour self-care centre in Weston that allows patients to access treatment without the aid of medical staff.

The patients have a swipe card that allows them to access the facility at any time.

“That gives them flexibility and freedom and means that they don’t have the machine and the paraphernalia in their own home – so it’s kept separate from their private life, which some people want,” Dr Talaulikar said.

He said both the Tuggeranong and the Belconnen renal services had the capacity to expand the number of patients seen every day should the need arise in the future.

“We are the only jurisdiction where we have future-proofed our dialysis needs until about 2023 to 2025 … depending on what the demand is likely to be,” Dr Talailikar said.

Speciality services to be made available

The next phase of ACT Health’s plan is to make a range of specialists available to patients while they are dialysing at Belconnen Health Centre.

“It’s a lot easier to access all those treatment when they’re in the facility,” he said.

“The plan is to have all of these people come to the patient when they’re on dialysis.

“That saves them a lot of time … and that’s significant when you look at the fact that every second day they spend six hours in a hospital facility,” he said.

“Hopefully we’ll have the podiatrists come through and then in the near future, possibly even the doctors coming and doing clinics here, so that they [patients] don’t have to come and visit us at Canberra Hospital,” he said.

There are also plans for doctors in the ACT and southern New South Wales to share the electronic medical records, allowing renal dialysis patients more flexibility to travel interstate.

“The same electronic records in the next year or so, will be rolled out to NSW across the renal network,” Dr Talaulikar said. 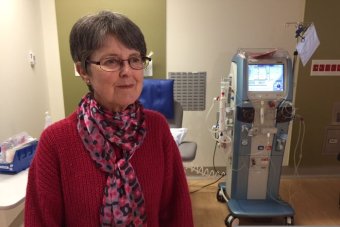 “Which means that if they go for a holiday to Batemans Bay, then they can dialyse in Moruya … the nurse there can pick up the record.”

For patients like Anne McGuire, the changes to the system are already having an impact.

Ms McGuire can now dialyse at a community centre just seven minutes from her home, with easy parking and access to nearby shops.

“I have been dialysing over at north side at Calvary Hospital, which wasn’t a purpose-built centre and also the parking was very bad, so my husband had to drive me and pick me up,” she said.

“It only takes seven minutes for me to drive here – so it’s very convenient.”