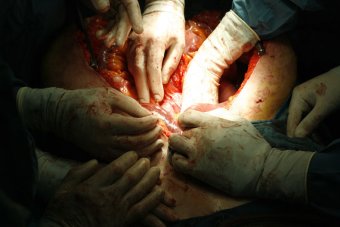 The critical shortage of organ donations in Australia has led doctors at a New South Wales hospital to use the recycled and diseased kidneys of cancer patients.

The John Hunter Hospital in Newcastle have been quietly transplanting the kidneys into dialysis patients since 2008 with great success.

Transplant surgeon and neurologist Dr Philip Sprott carries out the risky procedure, which involves clearing the kidney of cancer before transplanting it into the new patient.

“When we take out a kidney to cure the cancer of one individual, we often find that a large proportion of that kidney is quite healthy and normal,” he said.

“We also know that if we can get rid of all of the cancer from a kidney, then the rest of the kidney is free of cancer.

“So we get that normal, free-of-cancer piece of kidney and patch it up a little bit and then transplant it into somebody who’s needy, somebody who’s more elderly or at higher risk or not doing very well on dialysis.”

About two years ago 66-year-old Steven Weller was diagnosed with lupus, an autoimmune disease that meant he had to rely on dialysis for survival.

When he was finally offered a transplant, it was a kidney from a cancer patient.

Even though he knew it was a risky operation, he did not hesitate in saying yes.

“The risk was there but you’ve got the risk in any sort of operation anyway,” Mr Weller said, adding that the procedure had given him his life back.

“It is a new procedure, doctors are a bit sceptical about it, but I think the proof is in the pudding at the moment.

“I think if you can get a chance to have a normal life for a few years, well, you’d take it.”

Dr Sprott said the John Hunter Hospital had had great results with the procedure so far.

“All of the kidneys that we’ve transplanted have worked straight away,” he said.

“The vast majority of them, 90 per cent, are still working now and we’ve only had one patient I think has been mentioned that did actually inadvertently or unexpectedly get a cancer transplanted and have to have the transplant removed again.

“You have to live with dialysis to understand not only how inconvenient it is, but a dialysis machine is not as efficient as a kidney in purifying the blood and keeping your ideal level of health …

But Dr Sprott said that in an ideal world, there would be no need for this procedure.

“We do accept that it is a slightly controversial process and that the risks are somewhat higher, so at the moment we’re only offering it to people who are what you would call higher-risk patients, so they’re people over 60, people who already might have one or two health issues,” he said.

“So rather than expand it, ideally I’d like to see it eliminated, but as long as there’s demand and it serves that demand and it does so very well, it changes the life of people, then yeah, we’d be more than happy to do more of them but we’d rather there a better solution to that.”