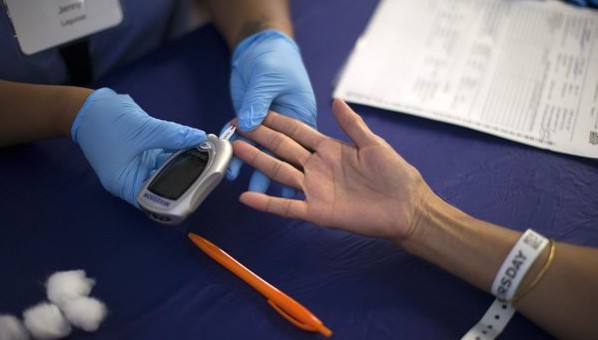 About half of American adults have either diabetes or prediabetes, a new study finds, highlighting the growing burden of chronic disease in the U.S. population.

The research, published Tuesday in the Journal of the American Medical Association, found that up to 14 percent of adults had type 2 diabetes in 2011-2012, and about 38 percent had prediabetes, a condition in which blood sugar levels are abnormally high. Without weight loss and moderate physical activity, 15 percent to 30 percent of people with prediabetes will develop type 2 diabetes within five years.

“By learning more about who has diabetes — and who has the disease but does not know it — we can better target research and prevention efforts,” Dr. Griffin Rodgers, director of the National Institute of Diabetes and Digestive and Kidney Diseases (NIDDK), said in a statement. “We have treatments to help people with diabetes, but treatments can only help those who have been diagnosed.”

Diabetes is a leading cause of death in the United States, killing more than 75,000 Americans each year. The condition also increases people’s risk of heart disease and stroke and, if left untreated, can cause complications including nerve damage, kidney failure and blindness. Most cases of diabetes are type 2, in which the body’s cells stop responding to the hormone insulin, which results in a buildup of sugar in the bloodstream.

In the new study, the researchers analyzed information from more than 26,000 U.S. adults who took part in surveys between 1988 and 2012. Participants were asked whether they had ever been diagnosed with diabetes, and they also gave blood samples so that the researchers could check the participants’ blood sugar levels.

The results showed that the percentage of people with diabetes increased from less than 10 percent in the years between 1988-1994, to more than 12 percent in 2011-2012. This rise parallels an increase in obesity — the most important risk factor for type 2 diabetes, the researchers said.

“Diabetes prevalence significantly increased over time in every age group, in both sexes, in every racial/ethnic group, by all education levels, and in all poverty income (groups),” the team wrote in the article. “When stratified by BMI, diabetes only increased among people with a BMI of 30 or greater.” (People with a BMI, or body mass index, of 30 or higher are considered medically obese.)

However, the prevalence of diabetes appeared to stabilize between 2007 and 2012.

In line with previous studies, the analysis revealed stark racial/ethnic disparities in the prevalence of diabetes. While 11 percent of whites had diabetes, twice as many blacks (22 percent) and Hispanics (22.6 percent), and nearly twice as many Asian Americans (20.6 percent) had the disease. The percentage of adults with prediabetes was more than 30 percent across all racial/ethnic groups, with the highest prevalence — 40 percent — among blacks.

Racial/ethnic disparities were also evident in the percentage of adults with undiagnosed diabetes. About one-third of whites with diabetes (32 percent) did not know they had the condition, compared to 37 percent of blacks, 49 percent of Hispanics and 51 percent of Asian Americans.

One reason for the high percentage of undiagnosed diabetes among Asian Americans may be that people in this ethnic group often develop type 2 diabetes at a lower body mass index (BMI) than people of other ethnic groups. This means that doctors may not screen Asian Americans for diabetes when, in fact, they could be at risk for the disease, the researchers said.

“The large proportion of people with undiagnosed diabetes points to both a greater need to test for type 2 diabetes and a need for more education on when to test for type 2 diabetes, especially since populations such as Asian Americans may develop type 2 at a lower body mass than other groups,” study co-author Catherine Cowie, director of diabetes epidemiology programs at NIDDK, said in a statement.

The results fit in with a 2014 study by the Centers for Disease Control and Prevention, which found that 29 million Americans have diabetes and another 86 million — a third of the adult population — have prediabetes, with disproportionately high rates among blacks, Hispanics, and Native Americans. About one in four cases of diabetes was undiagnosed, the study found.

The NIDDK researchers hope that future studies will provide more information about which subgroups of people are at highest risk for underdiagnosed and untreated diabetes.

Not all bad news

While the findings on diabetes are a startling reminder of the disease burden associated with obesity, the study results also “provide a glimmer of hope,” write William H. Herman, M.D., M.P.H., and Amy E. Rothberg, M.D., Ph.D., of the University of Michigan Health System, Ann Arbor, in an accompanying editorial.

The authors attribute these encouraging trends to “the shift in cultural attitudes toward obesity, the American Medical Association’s (AMA’s) recognition of obesity as a disease, and the increasing focus on societal interventions to address food policy and the built environment,” which they say are beginning to address some of the broad environmental forces that have contributed to the twin epidemics of obesity and diabetes.

The authors also cite the beneficial effects of the Affordable Care Act (aka “Obamacare”), including expanded insurance coverage for preventive care, funding for more diabetes prevention programs, and investments in the development of better screening and diagnostic methods and tools. According to a 2015 study published in the journal Diabetes Care, the Affordable Care Act’s expansion of Medicaid has dramatically improved diabetes detection rates, leading to a drop in undiagnosed cases and an increase in early-diagnosis.

“Together, these multifaceted approaches addressing both environmental factors and individual behaviors appear to be slowing the increase in obesity and diabetes, and facilitating the diagnosis and management of diabetes,” Herman and Rothberg write. They acknowledge, however, that although progress has been made, “expanded and sustained efforts will be needed to address these pressing health problems.”