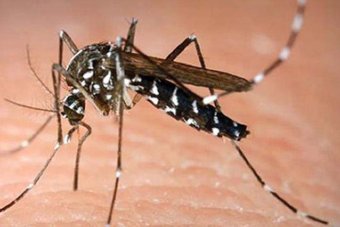 An aggressive, disease-carrying species of mosquito that is regarded as a public health threat has been detected at the Port of Cairns in far north Queensland.

The Asian tiger mosquito, or Aedes albopictus, has a voracious appetite for blood, can survive in a variety of climates, and spreads dengue fever, ross river virus and chikungunya.

State and federal authorities have been trying to keep it out of mainland Australia through a monitoring and trapping program at international seaports.

Dr Roscoe Taylor from Queensland Health’s Tropical Public Health Service said an adult female mosquito was caught next to a berth for international vessels in Cairns on August 12.

“[It] very probably came from one of three ships that visited the port in the preceding week or so,” he said.

The Asian tiger mosquito has not been found on the mainland since April last year when it was detected in Perth.

“This is a significant mosquito for Australia because we don’t want it on our mainland; it already exists in the Torres Strait,” Dr Taylor said.

“It’s also an aggressive feeder and can breed in vegetation around the outside of houses so that can make it actually harder even to control than the Aedes aegypti mosquito, which we always try to control for dengue outbreaks.

“Because it can breed in cooler climates, as well as warmer tropics, it’s of particular concern around Australia and that’s why there are good surveillance and detection programs in place.”

Dr Taylor said the Federal Department of Agriculture alerted his team the day the insect was found.

“The medical entomology unit here in the Public Health Unit swung into action overnight, planned the geographic area that they needed to investigate in conjunction with the [Department of] Agriculture staff,” he said.

“At 5:30 the next morning they were out there spraying all of the likely breeding sites in a strip of land that took into account the prevailing winds.

“They returned … the following morning, and also put in place an increased number of traps in the vicinity of the port so we can enhance our surveillance for the next four weeks.

“If there are no further detections after that, I think we can be quite confident that there aren’t any further albopictus mosquitos there.”

Dr Taylor said if more of the suspect mosquitoes were found, authorities would spray and lay traps over a wider area.

“We’ve proven that [Asian tiger mosquitoes] can be brought under control through the work that was carried out in the Torres Strait over the last three or four years.

“It’s been very successful in bringing down the number of detections that had been occurring there; this year for example there were fewer detections than ever.”

He said the mosquitoes were already well-established on the outer Torres Strait Islands, and the control programs were focussed on the main transport hubs of Thursday and Horn Island.

“I think with ongoing support for this program there’s a really good prospect of Australia keeping itself free from Albopictus mosquitoes, and there’s good commitment I think from all parties to do that.

“The funding the tropical Public Health Unit receives from the Commonwealth is through until mid 2017 and I’m confident that that sort of support will continue given the importance of the vector.”