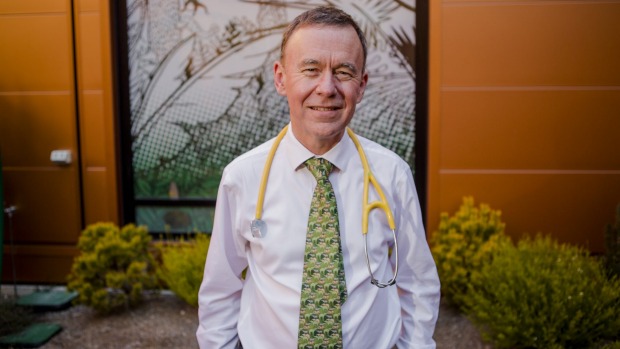 Dr Tony Lafferty from the new endocrinologist clinic which has opened at the Canberra Hospital to help transgender teenagers. Photo: Jamila Toderas

As colourful dinosaurs inertly frolic on his youthful tie, Dr Tony Lafferty gently discussed gender dysphoria while fun-loving children romped and roamed about the captivating playground at the Canberra Hospital.

Out in the open air, the conversation was deliberate as Dr Lafferty found the right words to explain a recent development at the hospital to assist transgender children from Canberra and the surrounding regions.

“The difficulty is accurately defining what gender dysphoria is, and also looking at the best ways to support these people,” Dr Lafferty said.

“At the same time, not stigmatising or seeming derogatory about the terminology, and being open and broad minded, and not being judgmental about where they’re at.

“This is a complex and evolving area,” he added.

In September last year, Dr Lafferty, one of two paediatric endocrinologists in the ACT, became the first specialist of his kind in the nation’s capital to offer support and medical services to children experiencing gender dysphoria and their families.

Gender dysphoria is classified as a marked difference between the individual’s expressed or experienced gender and the gender others would assign to him or her, according to the fifth edition of the Diagnostic and Statistical Manual of Mental Disorders from the American Psychiatric Association. DSM-5 states to be diagnosed with gender dysphoria, the feelings must continue for at least six months, and in children, the desire must be present and verbalised.

“One of the problems was up until last year, any child with suspected gender dysphoria used to have to go to Sydney,” Dr Lafferty said.

“There were a few people who eventually found their way to mental health professionals [in Canberra], but there was no co-ordinated team approach to managing this and I recognised the need for that to happen.”

Dr Lafferty is one part of a fragmented team across the territory which works together to assist people beginning the journey to identify as trans.

“The psychiatry and psychology people are the primary members of the team in terms of establishing a diagnosis that would require treatment from me,” Dr Lafferty said, however these mental health experts were removed from the hospital, an issue which Dr Lafferty hoped to rectify.

He is the driving force behind the push for a multidisciplinary gender dysphoria clinic to provide the best support for the trans community.

Dr Lafferty is seeing 12 patients between the ages of 10 to 17 with gender dysphoria, a number he admitted was almost at capacity for the current disjointed approach on offer.

His patients are at stage one of treatment, which involves the use of puberty blockers to halt the onset or persistence of puberty. Before entering stage two of the process to transition, the family must make an application to the Family Court.

Two of Dr Lafferty’s patients are in the process of making their application to begin stage two, the transition from assigned gender to the gender they identify as.

Dr Lafferty believed the number of children and teenagers presenting at the hospital with gender dysphoria was likely to swell as word spread that families no longer needed to travel to get help.

That is certainly the case for fertility expert Dr Bronwyn Devine of the Canberra Fertility Centre.

Dr Devine said she had seen a dramatic increase in Canberra teenagers identifying as transgender putting their reproductive cells on ice to prepare for their transition.

“The transgender teens I’m seeing are about 16 and 17 years old,” Dr Devine said.

She said she stumbled across the gap in support for trans youth during a conference in 2012.

“I’m a specialist and I didn’t think I was offering my patients the best care, because there is this whole area foreign to me,” Dr Devine said.

“I got online and found a post-grad course in public sexual health… with a smaller focus on transgender health.

“I remember just feeling my eyes open to the whole thing. I think this is an area that really needs people to be positive about it.”

Dr Devine said she did her research because she didn’t want to see trans people encountering health professionals who made them feel stigmatised or judged.

“When someone comes to see us for the first time, they’re often a little suspicious and not ready to disclose everything. The course equipped me with the skills to say I’m comfortable to talk to you about anything,” she said.

“I’m sure it’s confronting to realise the gender you identify with is not the gender that you’re assigned, I’m sure that’s extremely confronting and a very difficult thing to live through, but there is still a huge amount of marginalisation and stigmatisation of trans people,” Dr Devine said.

In Canberra, issues of stigmatisation and marginalisation are being addressed by A Gender Agenda, an organisation supporting the sex and gender diverse community.

Executive director Sue Webeck? said the service was often a first stop for people of all ages, as well as parents, partners and carers, to access support and information on the topic of transgender.

“We have an ever-growing membership base that truly represents the emergence of this population group,” Ms Webeck said.

She said services like Dr Lafferty’s at the Canberra Hospital were a positive step forward for better healthcare provisions for the trans and intersex community.

Dr Lafferty said the growing number of people identifying as transgender was being noticed.

“This is a phenomenon that’s being seen Australia-wide and almost certainly worldwide, where there are growing numbers of people presenting with gender dysphoria,” he said.

While the ethics and long-term effects of treatment for gender dysphoria continue to be discussed and researched both on a local community and international stage, Dr Lafferty said his desire to establish a targeted clinic in the ACT was based on his view of medicine.

“My role is to help people minimise health risks and optimise health and wellbeing,” he said.

“I think my personal views have changed over time, just recognising the difficulties these people struggle with, regardless of why they happen. The fact is they are where they are.”

“Whenever one looks at providing care for someone, you need to weigh up the risks of doing nothing versus the benefits of doing something positive.

“There is pretty compelling literature that suggests the benefits of doing nothing is not in the interests of the young person and certainly the risk of attempted self-harm and or suicide is actually quite high and actually quite a lot higher than it is in the general community.”