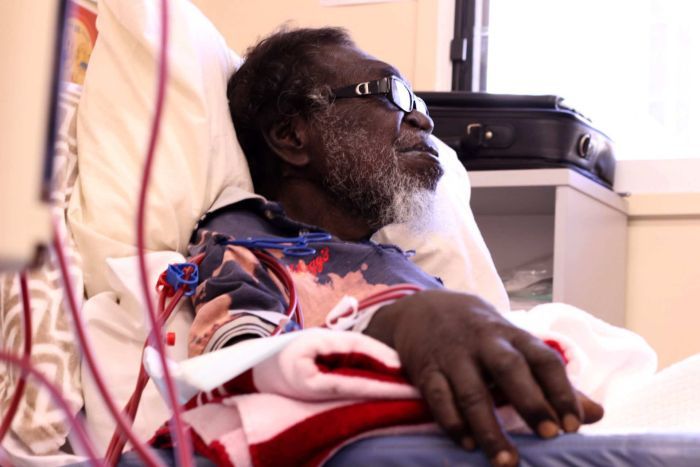 In a room decorated with photos of kingfishers, ducks and eagles, Morgan Mununggurr has a dialysis machine named after his totem – Mana, the shark.

Three times a week he visits the Miwatj Health Clinic in Yirrkala community outside of Nhulunbuy, or about 30 minutes drive from the site of the Garma Festival, and sits in a chair hooked up to a haemodialysis blood filtering machine.

It takes about four-and-a-half hours to clean his blood. The machine clicks and whirrs and Mr Mununggurr, formerly a keen hunter, eats buttered toast and talks about the “unlucky” ones – those who have to leave their families and travel to Yirrkala or Darwin from even more remote communities.

Yirrkala has the only haemodialysis treatment outside of Darwin in the Top End of the Northern Territory – a region with the highest rate of kidney disease in the world.

Though kidney failure is the most pressing health problem affecting East Arnhem Land, at the Garma Festival it has largely been overshadowed by discussion of the Adam Goodes booing saga and the question of recognising Indigenous people in the Australian constitution.

We were homesick every day.

A panel discussion on the topic was cut short for a ceremony awarding an honorary doctorate to Gumatj clan leader Gallarwuy Yunupingu.

His elder brother Dr Yunupingu, who was the former lead singer of Yothu Yindi and remembered as a “giant among his people”, died two years ago after a long battle with kidney disease.

On the panel, Dr Yunupingu’s widow Malawuy Yunupingu described the “nightmare” of moving to Darwin five years ago for treatment.

At the time there were no dialysis chairs in Yirrkala.

“We were homesick every day,” she said.

“That’s how much we were missing home, and also missing the family.”

The Yirrkala renal clinic has two machines – the one next to Mr Mununggurr is named after the totem of Dr Yunupingu – Baru, the crocodile.

Dr Yunupingu and Yalmay spearheaded the initiative to get two machines in Yirrkala. It meant he could go home and, when he died, it was on Gumatj land.

He suggested having two renal nurses in each community of north-east Arnhem Land and opening a fly in, fly out dialysis clinic out of the regional centre of Nhulunbuy.

About 1,000 people in north-east Arnhem Land have some level of kidney disease, and the rate is escalating.

Mr Mulholand estimated that without proper funding another 61 people in the region would develop end-stage kidney disease requiring similar treatment to Mr Mununggurr.

Treatment facilities are stretched to capacity. The lack of local dialysis machines means Yirrkala patients take turns travelling to Darwin for treatment, so others can receive treatment in Yirrkala.

But Mr Mulholand acknowledged more treatment was not the only answer – funding was also needed for prevention of the disease itself.

Ronald Morgan from the Kimberley region of Western Australia described how his mother donated him her kidney when he was five. It failed after 23 years of service and, seeking treatment, he moved his family 3,000 kilometres to Perth, where he struggled to find work and provide for his children.

“Even though I was sick I still had bills to pay,” he said.

“I am still yet to get back to my home.”