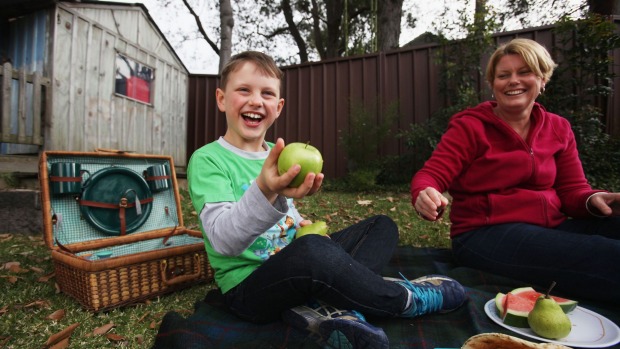 Fruit is just fine: Leonie Giddy and her son Bradford, 7 who is allergic to peanuts. Photo: Fiona Morris

Banning nuts in schools for older children does not protect them from anaphylactic attacks, but can instead cause resentment and bullying of the growing number of kids with food allergies, schools and parents are now being told.

Official anaphylaxis prevention guidelines have been updated by the Australasian Society of Clinical Immunology and Allergy to explicitly state that food bans in upper primary and high schools do not work, and can actually cause problems.

“Routine food bans in this setting have not been proven to reduce risk, are difficult to enforce, may result in a false sense of security, may trigger resentment and lack of co-operation with more important measures and may at times result in bullying of the individual [allergy sufferer],” the soon-to-be-published ASCIA guidelines state. 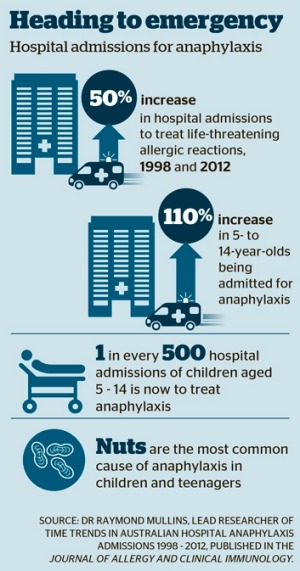 The guidelines of the allergy body, which represents allergy specialists, state there can be reasons for restrictions in early primary and preschool years.

Despite the official advice, many schools are heeding parental anxiety and banning nuts, and even dairy, to protect the burgeoning number of students with food allergies.

“We’re aware that some schools bend over backwards to welcome students and appease parental anxiety,” Margot Treloar, who is the co-manager of the NSW Anaphylaxis Education program, said. “School food bans are not necessary for most school-age children.”

It is estimated that four per cent of Australian five year olds now suffer a food allergy. There has been tenfold increase in the number of patients visiting allergy specialists in the past 20 years, according to Dr Raymond Mullins, chairman of the ASCIA anaphylaxis committee.

As the so-called ‘Allergy Generation’ grows up, the rate of admissions of children aged 5 – 14 to hospital for severe life-threatening allergic reactions more than doubled between 2005 and 2012, according to research by Dr Mullins published in the Journal of Allergy and Clinical Immunology this week.

Yet allergy specialists say food bans are particularly pointless when the Allergy Generation reaches high school, because it is impossible to police their eating.

“Most teenagers will not have a school teacher or parent checking what they do or don’t eat,” Dr Mullins said.

While the new ASCIA guidelines acknowledge that banning nuts in childcare centres and preschools can be necessary to prevent little children being accidentally exposed to them, they state that older children and teenagers “should have sufficient maturity and education to minimise their exposure”.

Children are advised to learn how to manage allergy risks themselves. They must be aware of the contents of what they’re eating, not share food, wash their hands, wipe down surfaces before they eat, and recognise the warning signs of an allergic reaction.

Schools require parents to alert them if their child has an allergy, and the school must put in place an appropriate management plan. NSW public school teachers are required to complete anaphylaxis training every two years.

Most anaphylactic attacks in children and teenagers are triggered by nuts. After a child died after eating a nut product made in a school food technology class in 2011, the NSW Department of Education has banned all nuts in any school activities, including camps, class projects and food technology classes. It does not require schools to impose blanket nut bans on students, but says individual schools many decide to implement them.

A spokesman for the NSW Department of Education said schools might ask families not to bring nuts to school as a harm minimisation strategy, but they could not claim the school was nut-free.”Such a claim could not be reliably made, and if made, may lead to a false sense of security about exposure to peanuts,” the spokesman said.

The president of Allergy and Anaphylaxis Australia, Maria Said, said that as a parent of a child with a food allergy, it was her experience that food bans did not work. “As a parent we want to remove anything dangerous to them . . . but it’s pie in the sky to say let’s just remove peanuts and we’ll be fine. In my experience it doesn’t work.”She warned that parents should never presume nuts weren’t present.

A spokeswoman for the Catholic Education Office Sydney said “many” Catholic schools “strongly encourage” a nut-free or dairy-free environment because they have decided these foods pose a significant risk to one or more of their students.

Seven year-old-Bradford is allergic to peanut and dairy, and must keep an EpiPen with him at all times in case of an anaphylactic attack. Ms Giddy believes his allergies have forced him to grow up more quickly than his peers.

“I think he’s older than a lot of kids around him,” the Heathcote mother said. “He has extra worries in his life. It does take a bit of childhood away from him.”

Ms Giddy welcomes the nut-ban at Bradford’s school, because it takes away some of the family’s concern about potential allergy risks. While she can see Bradford should be able to look out for himself when he gets to upper primary, she believes a nut ban is appropriate at his age.

Ms Giddy said children with allergies have enough to be anxious about without worrying whether their school environment is safe for them. “Let that child not have to worry, let them enjoy lunchtime, let them sit with their friends that they want,” she said. “It’s not about me, it’s not about other parents. It’s about the kids dealing with this on a daily basis.”