Nearly three years after Matthew Walzer, who has cerebral palsy, wrote a viral letter asking Nike for more accessible footwear, the company has announced a new sneaker with people with disabilities in mind.

The Lebron Zoom Soldier 8 Flyease basketball sneaker employs Nike’s new Flyease technology; instead of laces, which prove extremely difficult for people with movement disorders, stroke victims and amputees, the sneaker has a zipper that extends around the back of the shoe, allowing its wearer to “peel” it open with one hand and slide his foot in easily.

Designed by Nike’s senior director of athlete innovation, Tobie Hatfield, the footwear system aims to “help athletes of all abilities and ages perform better.” Hatfield worked with Walzer to develop the cutting-edge sneakers.

“It feels great to have this shoe made for everyone and to be the catalyst for such a great project,” Walzer, 19, told Mashable. “Writing my letter three years ago, I honestly wasn’t expecting much at all, maybe a polite letter from customer service … I couldn’t be more proud that people will be able to have this long, overdue independence.“

While Flyease has actually been seven years in the making, prompted by Nike CEO Mark Parker’s desire to help the company’s first employee, Jeff Johnson, after he had a stroke, it was Walzer’s 2012 letter that inspired Hatfield to move forward with the idea.

Walzer wrote that he was born two months premature, with underdeveloped lungs, and after being diagnosed with cerebral palsy, doctors said he’d never be able to walk. But with the aid of crutches and Nike basketball sneakers, which provided enough ankle support, he could.

There was one remaining problem: He only had flexibility in one of his hands. “I am able to completely dress myself,” he wrote in his letter, “but my parents still have to tie my shoes.” With his sights set on college, he hoped for a sneaker line that could ensure his independence.

The letter found its way to Hatfield, who had been working with Special Olympians and Paralympians on better athletic designs. He reached out to Walzer to begin designing prototypes to address his specific needs.

“I worked with Matthew just as I would with any athlete,” Hatfield said in a statement. “He was an absolute pleasure to work with.”

Over the next few years, Hatfield tested various iterations, eventually leading to the development of the current Flyease system.

Walzer is now a sophomore at Florida Gulf Coast University, where he wears his Lebron Zoom Soldier 8 Flyease sneakers — no assistance needed.

“Flyease is so easy to use and yet so revolutionary … This is by far the easiest and most comfortable shoe I have ever worn,” he said.

His dream is to help Nike with future Flyease projects, working to create accessible shoes that “could generate more independence for all abilities.”

The sneakers will be released to consumers in limited quantities beginning on Thursday through Nike.com. 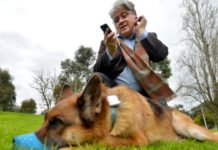