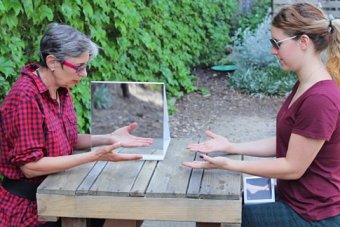 After Jenny Butcher suffered a serious fall in 2008, in which she severed all five tendons and the radial nerve in her left arm, her brain seemed to come to a drastic conclusion.

“Because the radial nerve was cut, my brain wasn’t recognising that I had a left hand,” Ms Butcher said.

Then, Ms Butcher was introduced to mirror therapy.

Mirror therapy involves presenting a reverse image of a limb to the brain in order to trick the brain into seeing two operative limbs.

While placing her injured hand into a box, and peering at the reflection of what appears to be two functioning hands, Butcher performs simple exercises to re-train the neural pathways to allow for increased, desensitised and painless movement.

“We had to train my brain to replicate the pathway of my right hand to get my brain to realise that I have a left hand,” she said.

Mirror therapy: It’s all in your head

Dr David Butler, who lectures in anatomy pain at the University of South Australia, said using mirror therapy required recognition that the problem was essentially all in your head.

He said it was an understanding that did not come easy.

“Our bodies do not create pain. It’s up to the brain to decide and weigh everything up and decide whether it’s painful or not,” he said.

You’re tricking the brain into thinking that the problem hand is better than the brain actually thinks it is.

This is unifying theory of pain. While our bodies can influence what we feel, all our experiences emerge from neural networks in the brain.

Ms Butcher had first-hand experience with this.

“At first … I didn’t actually notice the injury. All I wanted to do was get in my car and go, because I couldn’t feel my left arm,” she said.

“As soon as looked my arm and saw it all open and cut to the bone, straight away my brain recognised it, and the pain was just unbearable.”

While what she describes as a “cocktail of olive juice and blood” dripped down her arm, Butcher did not perceive the pain until she directly observed her injuries.

“You’re tricking the brain into thinking that the problem hand is better than the brain actually thinks it is,” he said.

While mirror therapy is recommended in the clinical guidelines of the Stroke Foundation of Australia, its usage is relatively limited.

“The evidence for mirrors from the basic sciences viewpoint, and evidence in its use in stroke and complex regional page syndrome… is OK,” Dr Butler said.

Even Ms Butcher acknowledged the scepticism of some doctors, noting that unless you had seen the process, it sounded pretty unbelievable.

“If I’ve got my left hand in the mirror box and somebody goes to touch my right hand, which is my good hand, I’d instantly pull away because I would think that it was my left hand and it would hurt. I couldn’t believe it myself,” she said.

“It did work for me, it really did.

“It worked to desensitise, to help with the pain, and it mainly helped to move my fingers. My brain was saying ‘you can move those fingers; you’ve just got to do it just like your right hand’.”

Dr Butler is calling for increased interest in the therapy, recognising that pain “is probably the costliest health problem on earth”, and mirror therapy offers a low-cost treatment.

“Pain costs Australia in one year about the same cost [of] the national broadband network (NBN) …. in its entirety,” he said.

‘Patient poured urine down my back’: Staff at Qld hospitals endure soaring violence