Feeling supported and understood by friends and the general public, and not feeling utterly alone anymore. This is how so many in the Huntington’s disease (HD) community would like to feel. Making inroads toward this level of support involves achieving one of those nebulous activism buzzwords: awareness.

Whether talking about Huntington’s disease or any other cause or human condition, we know awareness is a good thing. We know generally that awareness means a greater number of people becoming aware of something and hopefully understanding it at least on a basic level. But beyond that, the whole idea of awareness can be murky. How exactly is awareness beneficial for those who need it? And how can awareness of Huntington’s disease, a progressive, neurodegenerative disease the combines the symptoms of Alzheimer’s disease, Parkinson’s disease and ALS, be achieved?

The June 1 HBO premiere of The Lion’s Mouth Opens, the stunningly powerful and beautiful Huntington’s disease documentary by Academy Award-nominated director Lucy Walker, represents a big step forward for HD awareness. There’s something about life playing out on screen and the power of film, especially in the hands of a master documentarian like Walker, that uniquely conveys what the HD experience is about. In this case, Walker adeptly drops the viewer off in director/actress Marianna Palka’s apartment the night before Palka receives her definitive HD genetic testing results that will tell her if she will eventually develop the disease.

According to Huntington’s disease advocate Sara Dean, seeing someone as raw, honest and eloquent as Palka talking about her life, her father who has Huntington’s disease, and seeing her experience the emotional turmoil of being at risk expresses what people like Dean are going through with unparalleled effectiveness. Dean is herself at risk for HD and the co-founder of Team Run for HD, a Chicago-based organization that recruits and organizes runners from all over the country to raise money and awareness for HD. Team Run for HD also organizes other awareness events and held a public screening of “The Lion’s Mouth Opens” in Chicago in January, and a remarkable thing happened. Dean’s close friends who were in attendance entered the theater already “aware” of HD, because of its impact on Dean and her family. But seeing HD depicted in “The Lion’s Mouth Opens” was an eye-opening breakthrough for Dean’s friends.

“That was the first time they really got it,” Dean said. “They were aware. Being able to experience it through the magic of cinema, to walk in [Palka’s] shoes. That is a whole new level of awareness.”

“You get to be Marianna, and in those moments, whether or not you were familiar with Huntington’s disease, you become intimately familiar.”

In addition to the sheer wallop of Huntington’s disease reality displayed during those 28 minutes of “The Lion’s Mouth Opens,” the airing of the film on a national cable network amplified awareness by reaching a wider audience than HD is usually afforded. Even more beneficially, viewers are taking to social media to tell others about what they saw, with almost 300 tweets with the words “Huntington’s disease” on June 1, at least twice as much as any other day in the past month, according to social analytics provider Topsy. Viewers (and perhaps their followers on Twitter) are also seeking more information on HD, with Google Trends showing searches for “Huntington’s disease” topping out on June 2, one day after the premiere, and spiking again on June 4, which was the next airing of the film on HBO.

Much like “The Lion’s Mouth Opens,” works like bestselling author Lisa Genova’s novel Inside the O’Brien’s and Kristen Powers crowdfunded and ground-breaking HD documentary Twitch are also shedding light on not only the disease itself but the people behind the disease and the issues they face. This is a crucial facet of awareness, according to Lauren Holder of Clemmons, N.C. who was named the 2014 Huntington’s Disease Society of America Person of the Year for her advocacy work and has tested positive for the HD gene expansion.

“They are helping to bring this disease into the light, just as Michael J. Fox and Lou Gherig did with Parkinson’s and ALS,” Holder said. “We have an amazing opportunity to reach so many people across the world so we can unite and speak up about Huntington’s.”

As awareness is achieved, there are other tangible benefits. More knowledge and understanding of HD in the general public leads to increased support among those deciding how sought-after research funding gets allocated, says Dr. Jane Paulsen, director of the University of Iowa Huntington’s Disease Society of America Center of Excellence.

“There’s a societal impact and societal importance element that plays a big role in decisions that are made about what research gets federal and private research funding,” Paulsen said. “Awareness can put those who are impacted by Huntington’s disease to the top of mind and move them up the list of diseases that desperately need more research funding.”

“Awareness and advances in research really feed off each other,” says Paulsen, “with new findings leading to awareness, and awareness leading to more research to achieve new findings. You can’t have one without the other, and it’s a really exciting time for both awareness and research with many promising advances being made in recent months and years.”

Awareness can also be an important tool in the toolkit of a Huntington’s disease legislative advocate. Efforts led by the Huntington’s Disease Society of America are underway to pass the federal HD Parity Act, which would update outdated HD evaluation criteria used by the Social Security Administration and eliminate denial and multiple-year delays of disability benefits for those in need. A wave of HD awareness momentum would go a long way toward breaking through that initial layer of unfamiliarity and detachment a senator or representative might feel when approached about supporting the HD Parity Act. If Congress is representative of the people, then HD’s emergence in the general public’s cognizance would ensure more support on Capitol Hill.

Every bit of Huntington’s disease awareness is meaningful, Holder says. Whether it’s achieved through a one-on-one interaction or national film premiere, the community of HD supporters continues to grow. But there is still a long way to go. As of now, Dean says growing up in an HD family can be incredibly ostracizing. You feel like you have an incredible weight on your shoulders to bear alone, she says, because none of your peers can sympathize. They don’t know what to say or how to react. When someone is impacted by breast cancer, for example, we have a much better idea of how to react. As Dean says, we empathize, bring cards and we drop off casseroles. There aren’t the same walls built around the breast cancer community that those in the HD community face. Awareness brings down those walls, allows for discussion, and makes people feel less isolated and less alone.

“Awareness is our bridge to the world,” Dean says, “so that when someone says “I have Huntington’s disease,” people will respond with ‘We’re in this together — here’s a casserole!'” 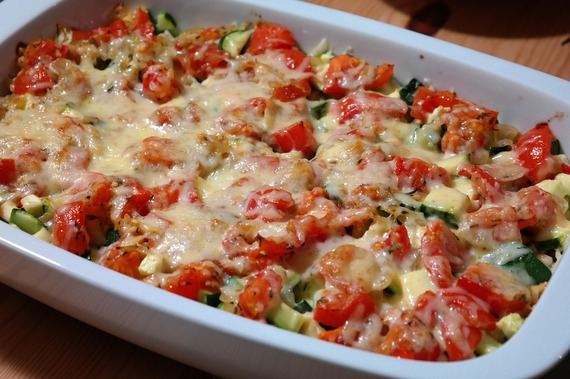 As advocate Sara Dean says, dropping off a casserole is often a tangible show of support for those facing a disease diagnosis. But without Huntington’s disease awareness, friends often don’t know how to react.

It’s funny (humor can be a huge awareness technique as well), but Dean’s hot dish example is a goal to strive for. With dedicated advocates like Dean, Holder, Palka, Walker, Powers, Genova and many others, the HD community is on its way to achieving a new wonderful term coined by Dean: “Casserole awareness.”

This op-ed is a part of a Huntington’s Disease Awareness Month collection and in collaboration with The Lion’s Mouth Opens, which premiered on HBO this June 1st and is available on HBO Go and HBO Now.

How Huntington’s disease proteins spread from cell to cell