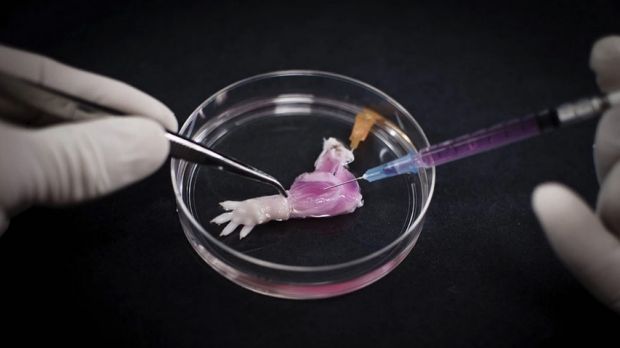 Muscle progenitor cells is injected into a decellularised rat limb, which provides structure onto which regenerated tissue can grow. Photo: Ott Laboratory/Washington Post

Harald Ott spent weeks in a lab tending to a tiny rat’s forelimb. He got a special incubator for it, monitored it daily, cared for its every need.

The reason a rat leg was worth all that work? There was no rat attached to it.

Ott, a researcher and thoracic surgeon at Massachusetts General Hospital, is the proud parent of the world’s first lab-grown biolimb — a living, functioning, artificial leg that responds to stimuli and even circulates blood, the hospital announced on Tuesday. Though it’s still a long way off from made-to-order transplants for humans, Ott and other regeneration experts say that the tiny pink rat leg is a step toward the future of artificial limbs.

“This is science fiction coming to life,” Daniel Weiss, a lung regeneration specialist at the University of Vermont College of Medicine, told the New Scientist.

The secret to building a living, functioning, artificial limb starts with a dead one.

Ott and his team built the leg using a technique called decellularisation, which involves stripping living cells from the limbs of dead donors (in this case, other rats) to expose their “scaffolds” — all of the inert, non-living parts. He then “recellularised” the limb by planting the cells that make up blood vessels and muscles onto the scaffolds, he told The Washington Post. Pop the whole thing in a specially designed bioreactor, allow it to grow for two weeks, graft some skin onto the fledgling leg, and the doctors had themselves their own, home-grown rat limb (minus the bones and cartilage). All they needed was a rat to attach it to.

Which they did, after anesthetising the animals. Ott found that blood from the living animals circulated through vessels of their artificial legs — a good sign that the biolimbs would work as a replacement for limbs lost to accidents or amputations — though he didn’t test for muscle movement or rejection by the rats’ immune system. The researchers did find that the muscles moved normally while the limbs were unattached. When activated with an electrical pulse, the tiny paws clenched and unclenched with about 80 per cent of the strength of a newborn animal.

Ott is the senior author of a paper on the biolimb project that will be published in the August issue of the journal Biomaterials.

The rats’ legs aren’t the first artificial organs to be regrown using a recipient’s own cells — the technique has already been used to build synthetic bladders, windpipes, and other organs for humans, with varying success. But all these previous decel/recel transplants (as they’re known) have involved relatively simple organs with few types of cells. A limb — made of muscle, blood vessels, skin and bones and expected to perform a range of complex tasks — is much more difficult to duplicate.

If it works, though, the resulting “biolimb” could some day be a powerful replacement for limbs that have been lost to accidents or amputations — looking, living and functioning like an amputee’s very own. Many prostheses and “bionic” limbs aren’t capable of carrying out the same complex functions as a real limb. And though doctors have successfully transplanted donated hands and even arms, recipients have to take drugs that suppress their immune systems for their rest of their lives to prevent their bodies from rejecting the new limbs.

“There are 1.5 million amputee patients in the states, and that burden on them is terrible from a psychological perspective and a functional one,” Ott said in a phone interview. “Even with prosthetics, many patients who have forearm loss do not regain full independence in terms of taking care of themselves, because the dexterity of these devices is not quite there yet.”

Arm and hand transplants, he added, “have really pioneered this experience and taught us how happy people are with having real living tissue.”

“If you can have that and eliminate the ethical risks of subjecting patients to immunosuppression, that’s the next goal.”

A biolimb does just that, he said. It looks, works and responds just like an ordinary hand, and since it’s made with the recipient’s own cells, it is unlikely to be rejected. Ott predicted that doctors will be testing lab-grown human limbs in about a decade. One day, he thinks, people will be able to donate arms and legs the way they now donate kidneys: The old organs will be stripped of their soft tissue, seeded with new cells, and given to amputees, like a futuristic organ refurbishment program.

Exciting though they sound, researchers are sceptical about when — and if — synthetic limbs will ever become available to amputees.

“For a complex organ like the hand, there are so many tissues and compartments that this will definitely not be a feasible protocol,” Oskar Aszmann, a professor of plastic and reconstructive surgery at the Medical University of Vienna, told the New Scientist. Aszmann is the developer of a bionic hand that’s controlled by the mind, so he has his own skin (or lack of it) in the game.

“Although this is a worthy endeavour,” he said, “it must at this stage remain in the academic arena, not as a clinical scenario.”

Meanwhile one of the world’s leading researchers in the field, Swedish thoracic surgeon Paolo Macchiarini, has come under scrutiny in the past month for making his work on synthetic replacement organs seem more successful than it really was. He conducted the first implantation of a synthetic organ in a human in 2011, prompting headlines about the promise of “tailor-made organs“.

But two of his patients who were given biosynthetic windpipes — including the patient in that celebrated first surgery — died after his initial, optimistic reports on their operations, and a third has been in intensive care for nearly three years, according to an independent investigation of his research published last month. The investigator who examined his studies said that Macchiarini was guilty of scientific misconduct by omitting or fabricating information about his patients’ postoperative status to make the procedure seem more successful than it really was. It’s not clear what caused the patients’ complications, but the finding was a sobering reminder that lab-grown organs are still far from the miracle treatment they’re sometimes portrayed as, critics said.

“The whole stem cell story has to come down to Earth,”  Pierre Delaere, a Belgian head and neck surgeon who brought the case against Macchiarini, told Science.

Given the risk of complications associated with attempting to recreate something as complex as a body part, Ott said he is cautious about moving too quickly toward lab-grown limbs for humans.

“What you never want to do is put a patient at an unnecessary risk for a small benefit,” he said in a phone interview. Living artificial limbs may be functionally and aesthetically preferable to bionic ones, but not if they threaten a patient’s health.

“Our scaffold is a platform,” he added. Now he just needs the scientific community to build on it. 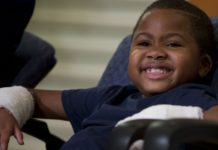 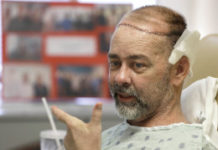 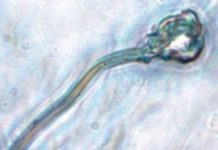