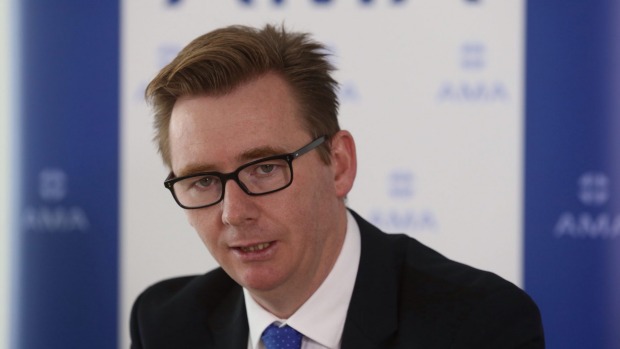 Doctors have called for reform of the private health insurance industry, claiming “junk” policies are clogging the hospital system.

Australian Medical Association president Brian Owler said policies that cover people for public hospitals only or are filled with exclusions that make them “essentially worthless” need to be stamped out.

“We can’t have people that think that they can first of all jump a waiting list because they’re private health insured and then go through a public hospital,” Associate Professor Owler told the AMA’s national conference in Brisbane on Saturday.

The previous day, he used his opening address to call for both sides of politics to lift the “damaging” freeze on doctors’ rebates before the next election.

He reminded delegates of the AMA’s success in bringing down the government’s previous attempts at introducing a GP co-payment.

“We swung into campaign mode and GPs across the country galvanise into action,” he said.

Health Minister Sussan Ley has said she wants it lifted as soon as possible, but other savings need to be found before that can happen.

But the AMA is set to ramp up its campaign against the freeze if it isn’t lifted before the federal election, due in 2016.

Associate Professor Owler says the freeze will affect the viability of practices, making it hard for GPs to invest in new staff or equipment, and potentially forcing them to pass costs on to patients, amounting to a so-called co-payment by stealth.

The health department’s own modelling suggests the freeze will leave GPs $2.10 worse off by 2018 and Ms Ley won’t rule out the possibility of those costs being passed on to patients.

She told the conference changes needed to be made to Medicare and public hospital funding before the system reached a crisis point.

She denied the government was “pulling the rug” out from public hospitals, but said efficiencies needed to be found with unnecessary presentations costing $3 billion a year.

Associate Professor Owler said he believed the freeze could potentially be lifted if savings are found through the coming Medicare Benefits Schedule review.

Opposition health spokeswoman Catherine King said Labor in government froze indexation for eight months as a temporary measure that was never intended to continue. She said she had already seen examples of practices that have started charging co-payments as a result of the current freeze.