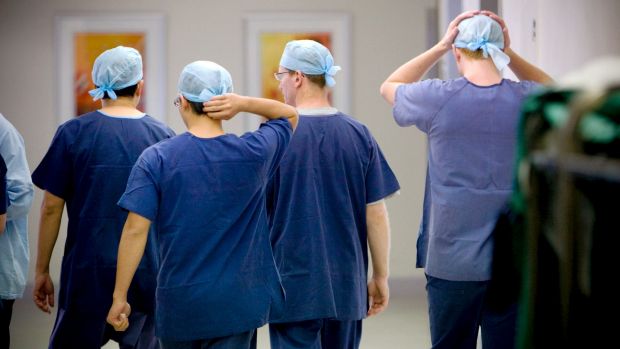 Harassment is a problem in all medical specialities – as is non-bullying colleagues’ unwillingness to intervene. Photo: Glenn Hunt

When I was bullied as a young doctor, the only person I confided in was my mother. As a general practitioner, her support and empathy is as much a professional expertise as a maternal one. Moreover, as a graduate of not one but two medical schools (in India and Australia) she has a uniquely broad perspective on medicine.

As empathetic and supportive as she was, three wry words hit hardest. They summed up what is surely the collective mood of thousands of Australian doctors in the face of the recent scandals of harassment, bullying and sexism; “nothing has changed”.

Perhaps the only thing that has surprised the medical community is the intense interest the public has shown in a debate that ostensibly does not affect them.

Those were pretty remarkable words from her, considering she was comparing my then recent experiences to her own in 1985 in Mumbai. She too had witnessed the harsher realities of the praiseless environment that is a junior doctor’s world: taunts, criticism, elitism, sexism and rather public humiliation.

She observed similar abuses as she trained in medical school and hospitals in Australia from 1996 to 2001. And in 2009 she saw these spectres revived when her son experienced the same issues.

It explains why she and many doctors are not surprised by the scandals exposed to the public over the last few months. Nothing has changed.

Perhaps the only thing that has surprised the medical community is the intense interest the public has shown in a debate that ostensibly does not affect them. After all, the bullying exposed is not the egregious kind seen in the ADF. At a glance, at least, there is no obvious evidence that bullying in medicine is worse than many other professions.

What rightly shocks people however is seeing a profession that outwardly demonstrates compassion and altruism, but inwardly betrays itself. Of all the professions that might be expected to stay uncorrupted by bullying and harassment, medicine might reasonably have been expected to be one of them. Instead, medicine has exposed a confronting reality: not only is no institution immune to this corrosion, but that the corrosion is institutionalised.

Seeing good doctors simultaneously be bad colleagues and superiors is an odd cognitive dissonance that I too have struggled to reconcile. I have seen kind clinicians to whom, even now, I would gladly send my family as patients, who then abused staff as soon as patients were out of sight.

This surprises no one in medicine. This Jekyll and Hyde complex is not due to a mass sociopathy that pervades our profession. It’s because of an invisible education. While we study and train in the curriculum of medical science, and being compassionate to patients, we also training in the hidden curriculum of medicine – the inculcation of the hierarchy.

Certain doctors have been implicated recently in the media. However, sexism, bullying and exploitation span not just across all medical specialities (not just surgery), hospitals, or even countries, but decades of medical history.

No doubt there are characters who wilfully commit the most egregious bullying. Beyond mere exploitation, and perverse sadism, it can also be a cover for their own inadequacies and insecurities.

But this doesn’t explain why the majority of doctors, a group of critical thinkers and leaders who are generally good people, are passively complicit by not intervening, even when in senior positions where repercussions are few.

Much of the inertia against these institutionalised practices is because of some surprisingly common beliefs amongst doctors.

If there is truth to the god-complex held amongst doctors, then equally common is the martyr complex. The idea that you simply must suffer in medical training is a pervasive self-delusion we use to rationalise our experiences. It is manifest in oft-uttered platitudes like “well, you’ve got to be tough” and “we all go through it”. The logic of this is on a basic level undebatable: you must indeed be hardy to put up with abuse. But the grotesque circularity of this logic disregards the notion that maybe no one needs to “go through it” in the first place.

This important question becomes a hypothetical, distant one for medical student and trainees, when they hear their seniors swap war stories of hardship from their junior years. To the young ears of future doctors, hearing increasingly impressive tales from the trenches, it sounds like a competitive sport. When the emphasis is on endurance, and not change, what hope is there?

The brutal vivisection of the medical profession in the public eye is confronting for doctors. It forces them to relive their own painful experiences, incidents they’ve witnessed and perhaps worst of all, the missed opportunities to right wrongs. But to be merely embarrassed by it is short-sighted, and blind to the opportunity in front. The struggle of this profession with workplace bullying and harassment is an instructive one for all institutions. Responsibility doesn’t just lie on the perpetrators, but also on the institutions that spawn them.

Vyom Sharma is a general practitioner.