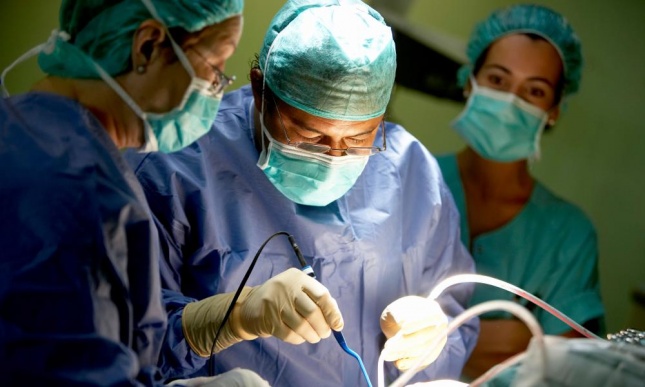 ‘Medicine is rightly depicted as a calling rather than a job. How did a noble and admired vocation allow itself to plummet to such depths?’ Photograph: Alamy

Last night’s Four Corners again laid bare the fraught issue of bullying and harassment in medicine, demonstrating the service that surgeon Gabrielle McMullin did to the profession by highlighting it earlier this year. Her blunt comments that trainee Caroline Tan would have been better off giving a surgeon who sexually assaulted her a blow job rather than filing a complaint were decried at the time but her detractors have been sorely disproven as witnessed by the growing calls to shine a light on what is really an open secret in medicine.

First, a disclosure. Helen Maroulis, one of the doctors accused of bullying on Four Corners, is one of several surgeons I work with. I send her some of my sickest patients who have developed a brain metastasis needing urgent surgery. As happens in large hospital systems, I have never met her but she has treated my patients promptly and me cordially. I am unqualified to comment on anything else about her, including the veracity of the allegations made against her, which are the subject of an ongoing investigation by her employer. I have also never met the “whistleblower trainee”, Imogen Ibbett, who describes feeling vulnerable and going home crying on many days. I have no special knowledge of Imogen’s experience but I can tell you this: there is a world of “Imogens” out there, in that, whether or not her allegations against Maroulis turn out to be accurate, there are many junior doctors suffering at the hands of their superiors.

Such an Imogen, who could be a student, intern or a mature trainee, contacts me on a regular basis. Why me, you might ask. I have no official position (or qualification) as a counsellor and I definitely don’t have special access to higher authorities. Most Imogens know me through my writing and sense that I might be able to give advice. They come from big and small hospitals, I don’t know most of them, and they want it to remain that way. Each woman is tearful, shaken and deeply apologetic for having succumbed to the urge to talk to someone. It takes them weeks to call me and even then, some hang up in distress. They are not all from surgery and their poor experiences are at the hands of female and male specialists. You could say that I am an accidental witness to their stories which are deeply upsetting.

The themes run in a loop. The medical student has been told to buzz off for being a nuisance and been repeatedly shouted at by a specialist. The intern has been told she needs to step up as more than a pretty face or she won’t get another job. The resident can’t bear the thought of being belittled for three long months but doesn’t know how to switch a rotation without attracting opprobrium. A trainee is pulled into a room by the same consultants who are harassing her to be told that public hospital jobs go to nice women and not drama queens. Foreign graduates face a unique blend of discrimination and harassment with no voice. A new migrant with a husband and two children to support simply doesn’t have the luxury of protest.

Sometimes the problem occurred last week, sometimes last year. Every single Imogen who reaches me has the same dilemma: how to do the right thing without sacrificing a hard-won career. Every Imogen strikes me as decent and thoughtful as I patiently go through the same questions.

Would you consider dealing directly with the offending doctor?

No way, my life would be unimaginable.

Would you go the hospital executive?

You are kidding, they are too busy keeping beds open.

Do you know about human resources?

I’ve heard they are awful.

Then how about an anonymous letter?

What? They will find out who I am and I’ll be in even more trouble.

So how can I help you?

You just did, by listening. Thank you.

Feeling completely impotent I yearn to find out what happened next but from the rare card that passes my desk I know that most of the time nothing happens. Except the damage to someone’s self-esteem, relationships and future prospects. The most pernicious damage results in self-harm, which draws collective astonishment as if it were wholly unexpected.

Bullying in medicine is as old as the profession itself but we have only recently woken up to the notion of addressing it. Hospitals and specialist colleges have been noticeably busy exhorting doctors to speak out. In the two decades since I entered medicine this is the first I have seen of an effort that at times seems almost to be begging doctors to stop talking to the media and talk to the hospital instead. A shower of procedures and policies has suddenly rained down on us, with assurances of fast, confidential and impartial help.

But the trouble is that after far too many years of disappointment doctors are not buying this message because our lived experience simply suggests otherwise. What the typical doctor has historically encountered when daring to make a complaint is an obtuse bureaucracy that is not confidential, not impartial and in fact, harshly judgemental. The complainant becomes the scapegoat and the perpetrator ascends the ranks. Frankly, the lived experience of doctors who speak out against unacceptable conduct is that institutions ostracise them and colleagues disown them.

The most competitive training colleges can behave like a cartel – their selection processes are opaque and favours are bestowed on a chosen few by a chosen few. The fear of missing out on a prized training position compels many doctors to put up with bad behaviour in the hope that one day, by becoming a consultant, they will put themselves out of reach of the bullies. The Imogens of medicine would rather drown their sorrows in other ways until then than be perceived by the hospital as “emotional”. Every Imogen knows that “emotional” is code for “inadequate”.

For doctors who turn to their hospital for help, alas, the structure badly fails them. It is commonly joked that the human resources team exists to protect the hospital from doctors and not the other way around. Senior clinicians counsel trainees to avoid turning to HR.

HR officers are not doctors and are ill placed to manage the unique concerns of doctors. They lack insight into the bitter power struggles, the daily indignities and the subtle sabotage that plague the lives of doctors, especially trainees.

When vulnerable trainees turn to senior staff, they are dismayed to find that the vast majority of bosses possess no formal training in handling complaints. Many are dismissive or hard-pressed to be an effective advocate for due process. All too often the added humiliation of confiding in a boss who simply reveals all to the alleged perpetrator provides an unbearable sting in the lives of already injured doctors. So the Imogens of the world remain adrift. They don’t know whom to trust and end up relying on a parent or a partner, who commonly describe being pushed along on a tide of helplessness.

So what will it take to move beyond the well-meaning policy manual on harassment in medicine? It will take trust, which is in very short supply and will rightly take many years to rebuild. After all, how can you trust people who have openly betrayed your friends?

It will take robust internal systems that are seen to deliver what they promise. As a tired physician puts it, bullies can’t be the ones handling the bullying.

But most of all, I think, it will take the kind of soul-searching that has yet to fully enter this conversation. Where did medical education and training falter? How did the God-complex arise? Medicine is rightly depicted as a calling rather than a job. How did a noble and admired vocation allow itself to plummet to such depths that we are the laughing stock of society while the Imogens sob silently?

Until we can look in the mirror and tackle these deeply uncomfortable questions with humility, integrity, and a hereto-unprecedented candour, the dust on the new policy manuals will keep settling as fast as they are printed