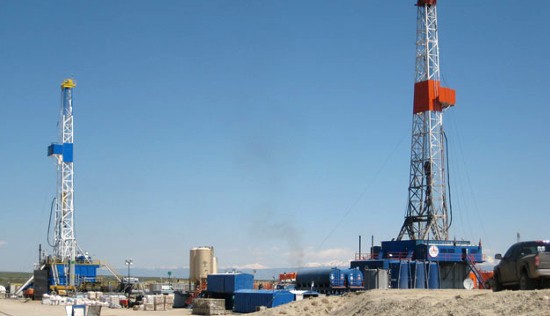 People living or working near hydraulic fracturing sites may be exposed to high levels of certain aerial pollutants, including some that are known to cause cancer and serious respiratory diseases, new research has found.

The study, carried out by scientists from Oregon State University (OSU) and the University of Cincinnati, found that hydraulic fracturing, or fracking — a technique used to extract natural gas from rock formations — emits harmful pollutants known as PAHs (polycyclic aromatic hydrocarbons), some of which are classified as human carcinogens.

The researchers published their findings online ahead of print in the peer-reviewed journal Environmental Science and Technology.

As gas drilling expands throughout the nation, production is moving closer to populated areas, with wells in some states now being drilled within a few hundred feet of schools and homes. This has prompted a host of new health and environmental concerns, particularly among those living close to fracking sites.

Past research has shown that fracking can release carcinogens such as benzene into the air along with other volatile organic compounds that are precursors of smog, which can contribute to asthma and other respiratory illnesses. However, this is among the first studies to examine the impact of fracking on airborne PAHs, larger molecules that are also linked with cancer and respiratory illness. The compounds are present in fossil fuels and are also products of their combustion—for example, they’re found in the exhaust of truck traffic near fracking sites.

The study got its start when a group of concerned citizens from Carroll County, Ohio, approached one of the researchers, wanting to know more about the health risks from fracking. Carroll County has an active natural gas well almost every square mile as it sits on top of the Utica formation, an oil and gas rich reef of subterranean shale.

In response to these concerns, the team designed a citizen-science study that was carried out over a three-week period last February. To assess air quality in the area, the team installed passive air samplers on properties owned by 23 volunteers living or working at sites ranging from right next to a gas well to more than three miles away. The samplers were made from T-shaped aluminum boxes which contained specially treated polythene ribbons that could absorb, or “breathe” contaminants in a similar way to human cells.

Elevated levels of PAHs were present across the study area, the researchers found, with the highest levels detected in areas closest to the gas wells. With more distance from the wells, PAH levels decreased by about 30 percent. But even at sites more than a mile away from a well, levels were higher than in an area of Chicago right next to an oil refinery — where previous research had been conducted — and ten times higher than an area of rural Michigan where there are no gas or oil wells.

What’s more, the results were consistent even after accounting for the influences of wood smoke and vehicle exhaust — common sources of airborne PAHs — supporting the conclusion that the gas wells were the cause of the higher PAH levels. Previously, it was assumed that PAH emissions near fracking sites were primarily the result of vehicle emissions, but these findings show that the drilling process itself is releasing the harmful pollutants.

Based on the levels of PAHs detected by the samplers, the team calculated that the cancer risk posed to a person living or working close to the well and facing chronic exposure to the pollutant exceeds the US Environmental Protection Agency’s safe risk levels. In all the scenarios they considered, the excess cancer risk for the group closest to wells was about 45 percent greater than that for the group farthest from them.

“Air pollution from fracking operations may pose an under-recognized health hazard to people living near them,” concludes Dr. Kim Anderson, the study’s co-author.

With approximately one in four Americans now living within a mile of an oil or gas well, and fracking expanding the industry’s reach even further across the country, these findings shed light on a potentially widespread public health threat with few regulations to limit its impact.

While industry groups continue to assure citizens that fracking poses no significant health hazards, a rapidly growing body of research suggests otherwise. According to a 2014 review of health-related studies on fracking, the current scientific research puts forward “both substantial concerns and major uncertainties to address,” including contamination of groundwater and drinking water supplies, and the release of a variety of toxic pollutants into the air.

Perhaps most alarming of all, a recent analysis of scientific studies, medical research, and government and industry reports concluded that current regulations are not capable of protecting the public from these health risks.

WHO calls on countries to protect health from climate change