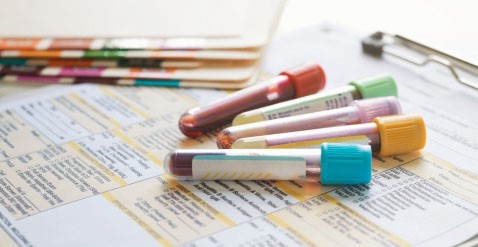 A new screening test that tracks changing levels of a protein in the blood can detect twice as many ovarian cancers as conventional methods, according to the results of a massive trial conducted by researchers at University College London.

The screening technique relies on a statistical calculation to interpret variations in the level of a protein called CA125, which is linked to ovarian cancer. While traditional diagnostic blood tests use a fixed cutoff point for levels of CA125, the new method gives a more accurate prediction of risk by detecting incremental changes in CA125 levels.

In the largest ovarian cancer screening trial to date, the new method correctly diagnosed 86 percent of women with invasive epithelial ovarian cancer. The standard cut-point test would have been expected to identify fewer than half of these women, according to results from previous studies and clinical practice.

“CA125 as a biological marker for ovarian cancer has been called into question. Our findings indicate that this can be an accurate and sensitive screening tool, when used in the context of a woman’s pattern of CA125 over time,” said co-principal investigator Dr. Ian Jacobs, who co-developed the statistical technique. “What’s normal for one woman may not be so for another. It is the change in levels of this protein that’s important.”

The 14-year UK collaborative trial of ovarian cancer screening recruited 202,638 post-menopausal women aged 50 and over who were randomly assigned different screening strategies, including annual multimodal screening, transvaginal ultrasound or no test at all.

For the new study, published in the Journal of Clinical Oncology, the researchers followed a subset of 46,237 women who continued to receive annual multimodal screening. Each participant was tested once a year for CA125 levels and then a computer algorithm was used to interpret their risk of ovarian cancer based on factors including the woman’s age, the original levels of CA125 and how that level changed over time.

When CA125 levels were used to categorize cancer risk alongside traditional risk assessment, the new algorithm was able to accurately identify 86 percent of women with ovarian cancer. Encouragingly, it also ruled out almost 100 percent of women who were cancer-free. This means these women would not undergo unnecessary further investigation and surgery.

Based on these preliminary findings, the new algorithm appears to hold promise as a valuable way of assessing ovarian cancer risk. This cancer has notoriously non-specific symptoms and is often only first detected once it is has reached an advanced stage, which is why survival rates remain low.

“A blood test to find women at risk of ovarian cancer is an exciting prospect, but this work still needs to be tested in women to see if it can save lives,” said Dr. James Brenton, an ovarian cancer expert at Cancer Research UK. “By tracking how the levels of the CA125 protein change over time we might have an early signal to detect tumors. Ovarian cancer is particularly hard to spot at an early stage so it’s vital that we find ways to diagnose the cancer sooner.”

As noted by the researchers, more studies remain to be done to test the algorithm on a larger scale and determine its effectiveness as a screening method. Before any new screening test is introduced there has to be careful assessment of its risks and benefits, including comparing it with other methods of detecting ovarian cancer based on an assessment of symptoms, clinical examination and investigation findings.

We don’t know yet how the new technique stacks up against other screening methods, as this study did not compare outcomes with the large number of women in the other two arms of the trial – those in the control group and those being screened by transvaginal ultrasound.

Additionally, it’s too early to know whether the screening method saved any lives by detecting the cancer earlier so it could be treated more effectively. The researchers expect to have that data later in the year, which will allow them to evaluate the impact of screening on ovarian cancer deaths.

“My hope,” said Dr. Jacobs, “is that when the results of UKCTOCS are available, this approach will prove capable of detecting ovarian cancer early enough to save lives.”