More than 60 percent of children with two sleepwalking parents go on to develop the condition themselves, new research shows.

“These findings point to a strong genetic influence on sleepwalking and, to a lesser degree, sleep terrors,” the Canadian study authors wrote. “Parents who have been sleepwalkers in the past, particularly in cases where both parents have been sleepwalkers, can expect their children to sleepwalk and thus should prepare adequately.”

Sleepwalking often begins in childhood and generally disappears by adolescence. But sleepwalking may continue into adulthood. It can also start later in life, according to the researchers. Sleep terrors, in which a person screams and is intensely fearful, also begin in childhood.

In the new study, Dr. Jacques Montplaisir, of Hopital du Sacre-Coeur de Montreal, and colleagues examined connections between these conditions in parents and adults. They looked at almost 2,000 kids born in Quebec from 1997 to 1998.

The odds of sleepwalking grew, depending on whether one or both parents were sleepwalkers.

Only 23 percent of kids whose parents didn’t sleepwalk developed the disorder. About 47 percent of those with one sleepwalking parent went on to be sleepwalkers. And if two parents wandered around at night while sleeping, the odds were about 62 percent that their child would also sleepwalk.

The study is published in the May 4 JAMA Pediatrics. 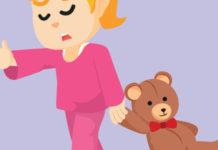