Since starting her small lemonade stand last spring, 5-year-old Na’ama Uzan has raised more than $25,000, all of which will go to support her brother’s neurological disability.

The Toronto girl is determined to help find a cure for Angelman Syndrome, a rare disability that has made it difficult for her older brother, Nadav, to walk and speak. The 7-year-old boy also suffers from frequent seizures.

“I’m doing it because I want to support a cure for Angelman Syndrome,” Na’ama told CTV News, adding that she would be happy to make $100 that day.

But her small operation, which also sells muffins and other pastries, has moved beyond the Toronto region. David Low and his partner Steve, who live in California, have raised $20,000 to support the cure and also set up a research grant in Na’ama’s honor. Their son Joshua was diagnosed with Angelman Syndrome six months ago.

“The technology and therapies will be there to help these individuals, and the only way that that hope is going to be fulfilled is through the efforts like Na’ama and her family who inspire others to give,” Low told CTV.

BONUS: 12 Inspirational videos for a pick-me-up 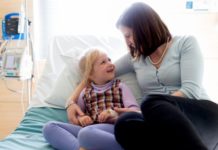