THE father of a young sailor from HMAS Stirling who took his own life says the debate surrounding the base has been hijacked by politicians tackling the ice epidemic.

IN the week the federal government announced a taskforce to combat the crystal methamphetamine scourge, Mark Addison said drug-taking was a symptom of depression, which was the deeper problem plaguing the naval base.

Mr Addison’s son Stuart was one of five HMAS Stirling sailors who killed themselves in 2011-12 amid a binge drinking and drug taking culture at the base. Stuart’s family, like many of the others, only found out about his mental health problems and two previous attempts on his life after he had died. Mr Addison has asked defence to waive its Privacy Act when self-harm is evident, and for next of kin to be notified immediately. He says it’s a simple request that has gone unmet, and he’s had no response to several emails to independent Senator and defence force advocate Jacqui Lambie. He sent the first mid-last year. “Now she’s getting involved,” Mr Addison told AAP. He says he told the Navy he understood defence force medical staff must advise next of kin of any signs of self harm under the Mental Health Act. He also referred to Prime Minister Tony Abbott, who told the ABC: “The fact that ice is reaching out even to defence force personnel indicates the scale of the problem”. “He did jump in very quickly,” Mr Addison said. “It might have been something they were sitting on but … it’s an odd coincidence.” He said drug use was recreational for some sailors, but for others, it was symptomatic of depression. Isolated from their families, they sought help from the Navy, but it was “not set up” to handle mental health problems, Mr Addison said. “There’s that stigma about talking about depression. It’s not really the sort of place where you’re going to get a friendly ear towards it. “They have good chaplains at Stirling. They were very much in touch with it but were probably a little intimidated because they were officers as well, so it was a difficult position to broker.” Senator Lambie did not return AAP’s calls. * Readers seeking support and information about suicide prevention can contact Lifeline on 13 11 14 or Suicide Call Back Service 1300 659 467. 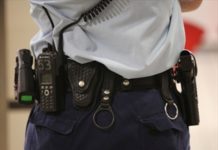