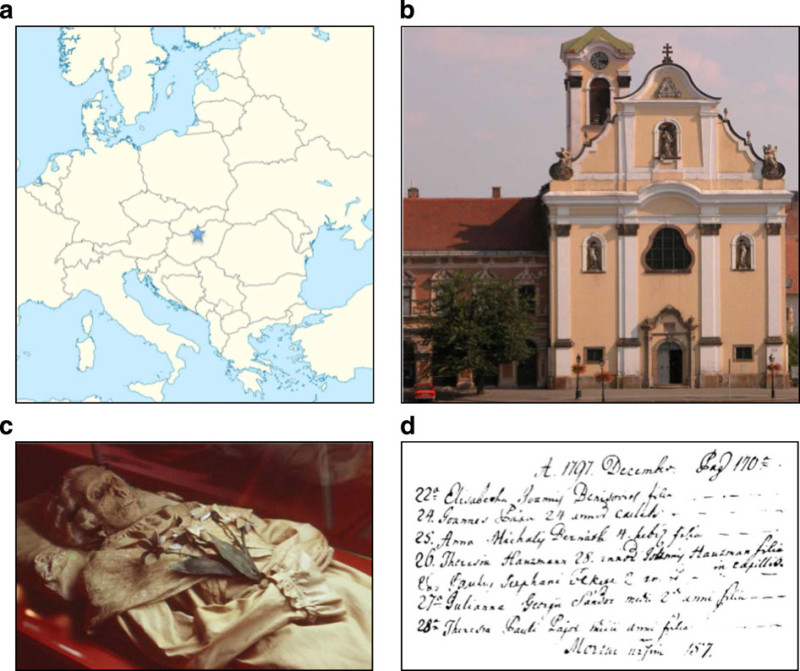 Bodies found in a 200 year-old Hungarian crypt have revealed the secrets of how tuberculosis (TB) took hold in 18th century Europe, according to a research team led by the University of Warwick.

A new study published in Nature Communications details how samples taken from naturally mummified bodies found in an 18th century crypt in the Dominican church of Vác in Hungary have yielded 14 tuberculosis genomes, suggesting that mixed infections were common when TB was at peak prevalence in Europe.

The research team included collaborators from the Universities of Warwick and Birmingham, University College London, the Hebrew University in Jerusalem and the Hungarian Natural History Museum in Budapest. Lead author Professor Mark Pallen, from Warwick Medical School, said the discovery was significant for current and future infection control and diagnosis.

Professor Pallen said: “Microbiological analyses of samples from contemporary TB patients usually report a single strain of tuberculosis per patient. By contrast, five of the eight bodies in our study yielded more than one type of tuberculosis — remarkably from one individual we obtained evidence of three distinct strains.”

The team used a technique called “metagenomics” to identify TB DNA in the historical specimens — that is direct sequencing of DNA from samples without growing bacteria or deliberately fishing out TB DNA. This approach draws on the remarkable throughput and ease of use of modern DNA sequencing technologies.

Gemma Kay, first author on the paper says: “Poignantly, we found evidence of an intimate link between strains from in a middle-aged mother and her grown-up daughter, suggesting both family members died from this devastating infection.”

The team used the 18th century sequences to date the origin of the lineage of TB strains commonly found in Europe and America to the late Roman period, which fits in with the recent controversial suggestion that the most recent common ancestor of all TB strains occurred as recently as six thousand years ago.

Professor Pallen said: “By showing that historical strains can be accurately mapped to contemporary lineages, we have ruled out, for early modern Europe, the kind of scenario recently proposed for the Americas — that is wholesale replacement of one major lineage by another — and have confirmed the genotypic continuity of an infection that has ravaged the heart of Europe since prehistoric times.”

Professor Pallen added that with TB resurgent in many parts of the world, the struggle to contain this ancient infection was far from over. He concludes: “We have shown that metagenomic approaches can document past infections. However, we have also recently shown that metagenomics can identify and characterize pathogens in contemporary samples, so such approaches might soon also inform current and future infectious disease diagnosis and control.”

The above story is based on materials provided by University of Warwick. Note: Materials may be edited for content and length.