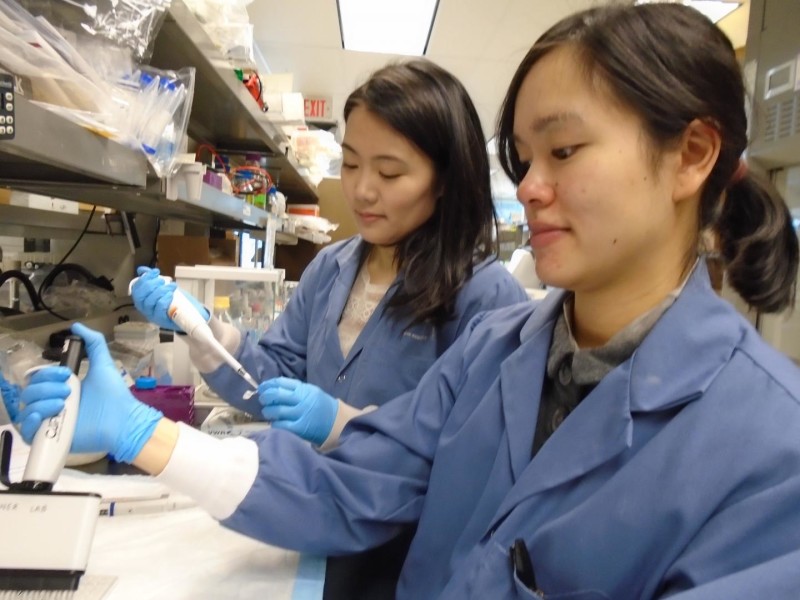 From front to back: Postdoctoral fellow Dr. Sue Tsai and graduate student Helen Luck contributed to the research identifying the immune system in the gut as a novel target for type 2 diabetes.
Credit: UHN

A commonly-used drug to treat inflammatory bowel disease, such as Crohn’s disease, has been shown to lower blood sugar levels in obese mice, potentially identifying the gut immune system as a new and effective target in treating diabetes in humans.

“These results are novel and important because we have identified the immune system that lives in the gut as a new player in the control of blood sugar. This opens up the entire field of bowel immunology to the study of obesity and its complications such as high blood sugar,” says Dan Winer, Scientist, Diabetes Research Group in the Toronto General Research Institute (TGRI), whose laboratory spearheaded this work, along with his twin brother Shawn Winer, and who are both co-senior authors on this paper.

Their research is published in an article entitled, “Regulation of Obesity-Related Insulin Resistance with Gut Anti-inflammatory Agents,” in the journal, Cell Metabolism, online April 7, 2015.

Being overweight, especially around the abdomen or waistline, increases the chances of developing type 2 diabetes. The question many scientists are trying to answer is: why does obesity contribute to insulin resistance? In their previous work, the Winers demonstrate that immune cells inside abdominal fat cause the release of ‘pro-inflammatory’ chemicals, which make the body less sensitive to insulin, the hormone that regulates blood sugar levels. This is known as insulin resistance — a major trigger for type 2 diabetes.

In this research, the focus shifted from the fat to the gut, where the Winers found that mice fed a high-fat, high-calorie diet had larger amounts of pro-inflammatory immune cells and less of the regulating cells which help end an immune response, than in normal mice. The researchers found this same result in 14 humans, seven of whom were obese. The high-fat diet induces inflammatory changes in the immune cells in the bowel, upsetting the immune balance, which in turn sets off a chemical cascade, damaging the bowel wall, allowing bacterial products to leak into the blood stream. This leakage is what contributes to insulin resistance, when the cells can no longer respond to and use insulin effectively to stabilize blood sugar.

“If we could block the pro-inflammatory immune cells at the very beginning of this process, we could treat the disease more effectively,” reasons Shawn Winer, who is a gastrointestinal pathology fellow in the Laboratory Medicine Program at University Health Network (UHN). “By refocusing on the bowel, we open up many more therapeutic options as we already have a number of approved drugs available to treat an inflamed bowel.”

The researchers then targeted the bowel inflammation found in the obese mice with 5-ASA, or mesalamine, a commonly used drug to treat inflammatory bowel disease. They found that the drug reversed insulin resistance and lowered blood sugar significantly in the mice to near normal levels.

“By using this drug, we found that we could prevent type 2 diabetes in mice,” says Dan Winer, who is also an endocrine pathologist at UHN and an Assistant Professor in Laboratory Medicine and Pathobiology at the University of Toronto. “If this works in humans, it could change the whole field of diabetes prevention and treatment.” He also points out that some medications targeting the bowel act locally in the gut, with minimal side effects and absorption in the rest of the body.

More than two million Canadians have diabetes. Currently, those with diabetes lower their glucose through diet, exercise, anti-diabetic tablets or insulin injections (usually several times a day) and must regularly monitor blood glucose levels. High glucose levels result in damage to eyes, nerves and kidneys and increase the risk of heart attack, stroke, blindness, erectile dysfunction, foot problems and amputations. Many laboratories around the world are in a race to find alternative and effective ways to lower glucose levels because of the severe complications which can result from high sugar levels. The current findings of this paper point to changes in the bowel which can be targeted by new classes of potentially effective, minimal side-effect therapies for insulin resistance, a precursor to type 2 diabetes.

The above story is based on materials provided by University Health Network (UHN). Note: Materials may be edited for content and length. 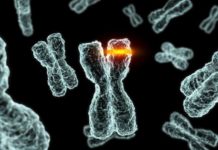 Down syndrome points to key gene responsible for type 2 diabetes