A brave teen who raised awareness for progeria, a rare genetic disease that causes those suffering from the condition to age eight times faster than normal, died this week.

Hayley Okines of East Sussex, England, died at home, the Progeria Research Foundation announced on Thursday. She was 17. Tributes for Okines, who captured the hearts of people worldwide due to her series of books and public advocacy for those with progeria, poured in after the news broke.

Okines describes her body as that of a 126-year-old in a video posted to a Facebook page dedicated to her life. Text in the video encourages viewers to “celebrate a life well lived.”

At 17, Okines lived three years beyond the typical life expectancy of those diagnosed with progeria. At 14, she published her autobiography, Old Before My Time, in which she reflects on the pains of growing up with progeria, as well as the happy moments in her life.

In a second book, Young At Heart, Okines shared the following poem, which was posted Friday on Facebook:

Hayley wrote this beautiful poem in her book Young at Heart:Dying only means moving into a nicer house.We have only…

Posted by Hayley Okines – Old Before My Time on Saturday, 4 April 2015

Audrey Gordon, executive director of the Progeria Research Foundation, praised Okines for her participation in drug trials and research that helped make progress toward treatment for the condition. Hundreds of tributes and messages of support showed up on the group’s website and the Facebook page celebrating Okines’ life.

“The entire Progeria family mourns together with many as we say goodbye to Hayley Okines, our smart, beautiful and spirited English Rose, who passed away today at age 17,” read a message posted Thursday on the Progeria Research Foundation’s Facebook page. “We will miss you.”

The entire Progeria family mourns together with many as we say goodbye to Hayley Okines, our smart, beautiful and…

Progeria affects about 1 in 4 million to 8 million newborns, according to the group. Those affected die at an average age of 14.

Additional reporting by The Associated Press 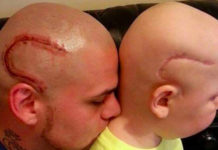 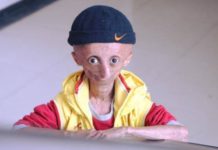