While thousands of faithful social media followers believed 26-year-old Belle Gibson was bravely battling five different kinds of cancer, the popular health ambassador was abandoning one of the biggest health claims to ever hit the Australian internet.

Belle, born Annabelle Natalie Gibson in 1991, constructed an online persona in which she added two years to her age and portrayed herself the proud survivor of blood, spleen, brain, uterus and liver cancers.

That many cancers may have killed most people, but Gibson’s online persona was unbreakable, with a chirpy belief in the power of diet and alternative therapies and a burgeoning lifestyle brand including a cookbook and a top-rated app in Apple’s online store. She commanded 193,000 followers on Instagram, where the pretty, bubbly blonde posted selfies and hints of the miracle of clean living.

In Australia, Gibson became the poster girl for beating the disease. She used social media to promote her message, the cancer to promote it further and toured the country with speaking gigs and promotional events.

Gibson, a mother to a four-year-old son Oliver, said she suffered a stroke at the age of 20 in 2009 after being administered the cervical cancer vaccine, Gardisil, and then developed a brain tumour. With only four months to live, she said, she rejected medical treatment. Instead, Gibson claimed, she began to use various alternative therapies to heal herself, such as colonics and oxygen treatments.

Each time, Gibson claimed she survived with a detox. That became the basis of her wildly successful Whole Pantry business, which included a cookbook from Penguin Books Australia and a wildly popular app which gained 200,000 downloads and became the number one app in the App Store in Australia after its release in August 2013. Gibson’s app also reached number one in food and drink category in 113 countries at various times since its launch in August 2013 (US included).

“With frustration and ache in my heart … it hurts me to find space tonight to let you all know with love and strength that I’ve been diagnosed with a third and forth cancer”…“I have cancer in my blood, spleen, brain, uterus and liver. I am hurting…I wanted to respectfully let you each know, and hand some of the energy over to the greater community, my team and @thewholepantry …please don’t carry my pain. I’ve got this.”

Gibson followed up by promising that 25% of her profits from the book would go to charity and claimed $300,000 had already been donated to help others in need. Those who met her described her as humble and generous.

As her profile grew and she looked to launch The Whole Pantry book in the UK and U.S., Gibson was chosen to work with Apple on a version of her app for the Apple Watch and was flown to California.

The limits of the entrepreneur’s success seemed endless.

The money can’t be found; Belle goes into hiding

In early March, Fairfax Media published a story about not-for-profit organisations around the world missing donations that had been promised by The Whole Pantry. Gibson’s story started to unravel.

The company released a statement on Facebook (now deleted) saying the charities had not been paid due to financial issues but it intended to make the payments.

Belle Gibson went into hiding. She wiped her personal and The Whole Pantry Instagram accounts, shut down her personal Twitter account and deleted all social media traces she could find.

It was too late.

Once the darling girl of Apple, the company has deleted her app from sale in the iTunes store and halted promotion on the Apple Watch App page. Some iPhones in Apple’s stores, however, still carry demonstration copies of the Whole Pantry— digital ghosts of Belle Gibson’s convincing popularity.

The Whole Pantry book publisher Penguin Books has since pulled her cook book from the shelves, after admitting they didn’t fact check Gibson’s medical history. It seems no one did.

“Despite our best endeavours, we have not received sufficient explanation from Ms Gibson, author of The Whole Pantry recipe book, in response to recent allegations. As such, we have been left with no other option but to stop supplying the book in Australia,” Penguin said in a statement.

Once the darling girl of Australia, Gibson is now hiding as many of her fans reel in shock at how easily they trusted someone online.

Gibson has not said she faked her cancer for the last six years, instead telling The Australian she was “misdiagnosed” by a medical team from Germany, which was led by a doctor she has declined to name.

Mashable has been in contact with Gibson via text message. She has declined to answer the allegations against her as of publication time.

The doctors claim a ‘miracle’

The tangle of Gibson’s sicknesses seems to lead back to 2009, the year she was posting up a storm on the skateboarding forum skateboard.com.au. There, she acted like one of the boys, using crude language and talking about sex. She had a markedly different look back then, an inky-haired rebel with symbolic tattoos and none of the peppy blonde cheerleader look she later adopted.

Her tone suddenly changed in May 2009, when she posted numerous times about hospital visits for multiple heart surgeries and a cancer diagnosis. By July, she tells the forum she has “a stage two malignant tumor of the brain.”

The details are patchy, often lighthearted and seemingly out of the blue — an announcement to her friends on the forum who appear to have become her friends offline as well.

“I had fluid in the pericadium [sic] (sac around heart) that needed to be drained or else my heart would’ve stopped pumping blood, and [I] would’ve died and I need to get a valve replaced, but cant afford it yet,” she wrote on May 5, 2009. In another post on May 20 she says she is going “back into hospital for round three of heart surgeries,” and mentions picking up “cancer results” in passing.

On May 21, she details an amazing recovery: “The doctor comes in and tells me the draining failed and I went into cardiac arrest and died for just under three minutes. I have the most intense bruising from the paddles when they electrocuted me back to consciousness. [I] went straight into a coma situation for 6 hours and just woke up crying for my iPhone … They’re amazed I’m sitting up testing already and claim miracle.”

The mother of one had hundreds of thousands of adoring fans following every inspirational quote on her Instagram account, where she promoted her cancer-free state as a direct result of healthy living.

‘You start to think to yourself: is all of this for real?’

The real story of Annabelle Natalie Gibson started to leak out in March, 2015.. First, she was younger than anyone thought. She was actually born in 1991, meaning she is now 24 and at the time of her apparent brain tumour in 2009 she was just 17 years old —not 20, as she claimed.

A friend of Gibson’s from the forum who befriended her offline, who has asked not to be identified, told Mashable Gibson was “lost” during these years and travelled from state to state. He said her travels across Australia consisted of Port Macquarie, Brisbane, Perth, Sydney, Melbourne before she got pregnant.

The friend said he was only told by Gibson in person that she may have cancer, but upon realising the details of her online stories he said the whole situation became “extreme.” When she moved to Melbourne in late 2009, things became very strange.

“At times she would mention the possibility of cancer here and there, and it seemed to be a lot more talk then actuality. Then she moved to Melbourne and basically seemed to have problem after problem after problem, which after the first 5 or 6 major illnesses, you start to think to yourself: is all of this for real?” he said.

“Anyways a few years pass and all of a sudden the whole health food book / app seem to take off, which is pretty remarkable for someone who was supposedly barely able to survive.”

With a family member fighting cancer, the friend from the online forum said Gibson’s posts about how easy it was to cure cancer started to make him angry.

“A family member of mine went through a tough cancer period, and at the time Belle was posting stuff all over Facebook about how easy it is to beat cancer , and at that moment i just thought to my self this is all bullshit,” he said.

Many question Elle magazine’s one-time “most inspiring woman of the year.”

The magazine wrote a feature piece on her in December 2014, praising the wonder girl from Australia who defied the odds.

Following the publication, they received an anonymous email, which the magazine has recently published.

The note said all was not what it seemed and Gibson was a “wolf in sheep’s clothing” and a “master manipulator.”

Here are a few things you might need to know before you consider publishing more about this woman. She’s a compulsive liar. In fact, she got so tangled in her own web of lies living in Brisbane, she moved to Melbourne to start a new life of lies – ‘the cancer lie’ this time … She never had/nor does she have currently have any form of cancer (Where’s the proof?) I’ve known Belle since her childhood (and am close with her mother) and she has always had a problem with fabricating stories from nothing on a regular basis. It’s one thing to act as if she can cure ‘her cancer’ by eating organic (which simply isn’t true) but to give false hope to people who are ACTUALLY fighting cancer is nothing short of evil.

Belle Gibson is still keeping a low profile. She has, however, told Mashable that she plans to tell her story soon — and that could get the firestorm started all over again. 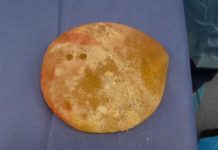