LONDON (Reuters) – As many as 1,000 people a day in Europe contract tuberculosis, and slow progress against the disease coupled with rising drug resistance mean the region is unlikely to defeat it until next century, health officials said on Tuesday.

At current rates, the region has little chance of meeting a target to eliminate it by 2050, according to a joint report by the World Health Organization (WHO) and the European Centre for Disease Prevention and Control (ECDC).

“MDR-TB (multi-drug resistant TB) is still ravaging the European Region, making it the most affected area of the entire world,” Zsuzsanna Jakab, the WHO’s regional director, said as the report was published.

TB is a contagious bacterial lung disease that occurs mainly in areas of poverty and deprivation and spreads via the coughs and sneezes of an infected person. It is hard to treat, requiring months of antibiotic treatment, and drug resistant strains are rapidly gaining a foothold.

TB in all its forms killed around 1.5 million people worldwide in 2013 and the WHO warned last year that rates of MDR-TB were “crisis levels”.

The WHO’s European region covers 53 countries with a population of nearly 900 million, of which around 508 million live in the European Union and European Economic Area EU/EEA.

Tuesday’s WHO/ECDC report said the overall trend across the region showed TB rates falling in some high-priority countries, while the disease is fighting back in other low-incidence countries.

“At the current pace of an annual 6 percent decline, the EU/EEA will only be free of tuberculosis in the next century,” said Marc Sprenger, director of the Stockholm-based ECDC which monitors disease in Europe.

He said that for Europe to reach elimination — defined as less than one case of TB per 1 million population per year — by 2050, it would have to cut down cases at least twice as fast.

“Our data show a Europe in need of tailored interventions which target each country’s settings,” Sprenger said.

In most countries were TB is relatively uncommon, rates are either stable or going down only very slowly, he said, and the majority of patients are of foreign origin. Countries with larger TB problems, however, also have higher rates of re-infection and report many more cases of multi-drug resistant TB. 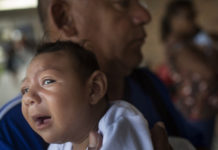 Zika virus is spreading ‘explosively’ and may be international health emergency, WHO warns