Medical researchers at The George Institute of Global Health estimate somewhere between five and 10 million people in the world need dialysis right now.

According to the institute’s Australian director Professor Vlado Perkovic only a small portion of that number have access to it.

“Somewhere between half and three quarters of all people with kidney failure around the world never get the chance to receive dialysis and are doomed to die of their disease,” he told PM’s Mark Colvin.

The group’s research, titled Worldwide Access to Treatment for End-stage Kidney Disease: A Systematic Review, shows that by 2030, the number of people on dialysis is predicted to double to about 5.4 million, with most of the growth in Asia.

The figures imply an urgent need for affordable dialysis, with current costs ranging from $US20,000 to $US100,000 for each person, each year.

The George Institute for Global Health, the International Society of Nephrology and the Asian Pacific Society of Nephrology have joined with the Farrell Family Foundation to create the Affordable Dialysis Prize, which challenges innovators, engineers, patents, medical device companies, students, technology enterprises and inventors to design an affordable dialysis machine.

“We’ve set a target of $1,000 for a machine to be built that could perform dialysis in much the same way as the machines do today but that could use any water supply, rather than just requiring purified water and that ideally would be rechargeable, either using rechargeable batteries or ideally using solar power,” Professor Perkovic said.

He said innovative focus had so far been on creating better machines with additional features, rather than developing efficient and affordable solutions.

“We need to focus not on making a shiner fancier new machine, but making an equally effective but much, much cheaper machine so more people can be treated,” Professor Perkovic said.

“The fundamental principle and the thing that hasn’t been focused on is to produce a low-cost version of dialysis that’s effective to allow those people that don’t currently have access, to get access.”

Professor Perkovic said for those living in remote parts of Australia, particularly Indigenous communities, access to dialysis was difficult.

“In Australia the vast majority can get dialysis, but it often means making major compromises with regards to where they live,” he said.

For example, in places where there is a lack of reliable supply of clean water or power, people may have to travel many kilometres from their communities.

Professor Perkovic said the biggest challenge of making an affordable dialysis machine was the use of clean water.

“The water that we’d be using for dialysis would be effectively exposed to people’s blood stream so it must be pure,” he said.

“The machines, the reverse-osmosis machines we use to do that these days are very expensive; adding at least as much of the cost as the dialysis machine itself.

“[But] there are technologies that have been developed, though, that allow puddles to be converted into quite clean water but they’ve not been applied to dialysis.

“What we’d really like to see is some of these novel technologies moved over to provide access to dialysis for people who don’t have it today.”

Professor Perkovic said that ideally, the new design could take water from any source and purify it on the spot, while meeting all standard safety requirements for blood pumps.

He said this challenge was more difficult than finding access to power.

“There are [mobile phone] charging stations being installed in the most remote places on earth, so I think the power issue is less of a challenge, but it would need to have at the minimum, ideally, rechargeable batteries,” he said.

“Then [we can] hopefully partner with other organisations to develop and produce the machine more broadly and make it available,” Professor Perkovic said. 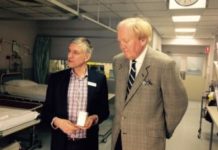 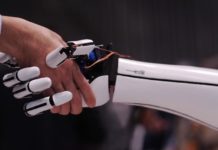 This exquisite, 3D-printed robotic arm is changing the way we think about prosthetics