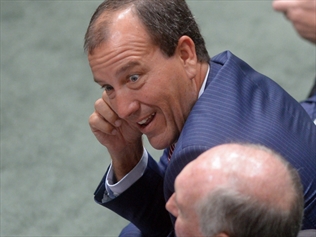 Liberal MP Mal Brough has called for the GP co-payment to be dumped. Source: AAP

AMID questions of Tony Abbott’s leadership a Liberal MP has called for the GP co-payment to be dumped.

QUEENSLAND MP Mal Brough says Medicare spending on GP visits is not out of control.

This contradicts the message from the government since it unveiled the co-payment in the budget last May. The government initially wanted to impose a $7 co-payment on Medicare rebates, which it brought back to $5 late last year in the face of widespread opposition. Mr Brough told a meeting of medical professionals on the Sunshine Coast on Tuesday it was more cost-effective for governments to spend money on GP visits than hospitals. Government spending on GPs may not have flatlined but it wasn’t out of control, he said. In contrast, spending on hospitals had a “trajectory going north rapidly”. “I am suggesting to the government that we should be taking the co-payment off the table full stop,” he said. “I don’t think it makes economic sense and I don’t think it makes health sense.” Mr Brough has reportedly been touted as a “stalking horse” to draw out a potential leadership challenge against Mr Abbott. But he insisted on Tuesday night he has no intentions of challenging the prime minister.