CHICAGO (Reuters) – A California turkey farm has been quarantined after confirmation of the first case of an outbreak of the highly pathogenic H5N8 avian influenza strain in the Pacific Northwest and in a commercial flock, the U.S. government said.

The news on Saturday came just weeks after China banned U.S. poultry after an outbreak of another strain of bird flu in the Pacific Northwest.

In the latest outbreak, Foster Farms said in a statement that it had informed the U.S. Department of Agriculture after detecting the H5N8 strain on a single turkey ranch in Stanislaus County following routine testing.

State and government labs confirmed the findings from samples submitted by Foster Farms, which had experienced a spike in bird deaths, according to the USDA.

The USDA’s policy requires that the ranch be quarantined. The agency will humanely kill or destroy the birds to prevent the spread of the disease to migratory and commercial flocks.

In 2013, California produced 13 million turkeys, according to the latest USDA data.

The agency said H5N8 did not pose a health risk to the public, and birds from the involved flock would not enter the food system.

A few weeks ago, China had banned all imports of U.S. poultry, poultry products and eggs because of recent reports of highly pathogenic strains of avian influenza.

The ban came after Hong Kong in late December suspended imports of certain U.S. poultry and poultry products after two separate virus strains, including H5N2 in northern pintail ducks, were identified in Whatcom County, Washington, according to the USDA.

Until now, neither virus has been found in U.S. commercial poultry, and no human cases with these viruses have been detected in the United States, Canada or internationally.

The discovery of bird flu on a commercial farm will undoubtedly cause more trade disruptions for the United States, said Rabobank analyst Don Close.

“That is scary,” he said during a panel discussion at a commodity conference in Miami. 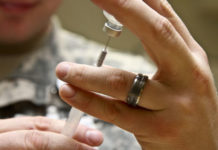