Sherri Tenpenny is an osteopathic doctor from Ohio in the United States, widely known for her anti-vaccination stance.

Her plans to visit Australia to deliver lectures warning parents not to vaccinate their children have prompted a pro-vaccination group to ask that her visa be denied, amid accusations that she is endangering people’s health.

Dr Tenpenny has written books and regularly delivers seminars about what she says are the negative impacts of vaccines on health, and says a meeting in 2000 at a public charity anti-vaccination advocacy group is what led her to investigate “the truth” about vaccines.

After graduating from the University of Toledo, Dr Tenpenny received her medical training at Kirksville College of Osteopathic Medicine in Missouri.

Osteopathy is a system of medicine based on the theory that disturbances in the musculoskeletal system affect other body parts.

After medical school, Dr Tenpenny served as an emergency department director at a regional Ohio hospital for 12 years.

She then opened a medical practice specialising in osteopathic manipulative medicine in 1994 and went on to found two more practices in 1996 and 2011.

The Tenpenny Integrative Medical Centre claims to deliver “holistic medical care” without the use of pharmaceutical drugs.

Dr Tenpenny is widely known in the US for her outspoken views on vaccination, and regularly delivers lectures and attends seminars on the subject as well as other parts of integrative and alternative medicine.

Her website says it contains “a wealth of information that you won’t find at your paediatrician’s office”.

The first book rejects arguments supporting vaccination, stating that causal links between vaccines and conditions such as autism have not been disproven, and recommends ways to legally avoid vaccinations.

Dr Tenpenny believes parents should not be “forced to make decisions based on fear”.

In a 2011 article titled The Ten Reasons To Say No To Vaccines, she warned that “each shot is a Russian roulette; you never know which chamber has the bullet that could kill you”.

She has been criticised by the Stop The Australian Anti-Vaccination Network for “endangering people’s health” and “targeting vulnerable parents”.

The Australian Government says it is considering a petition written to Immigration Minister Peter Dutton to deny Dr Tenpenny a visa. 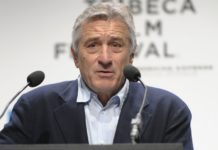 Robert De Niro still supports anti-vaccine documentary: ‘All I wanted was the movie to be seen’

Gardasil: A gift for potential cancer patients or a prick that can maim?