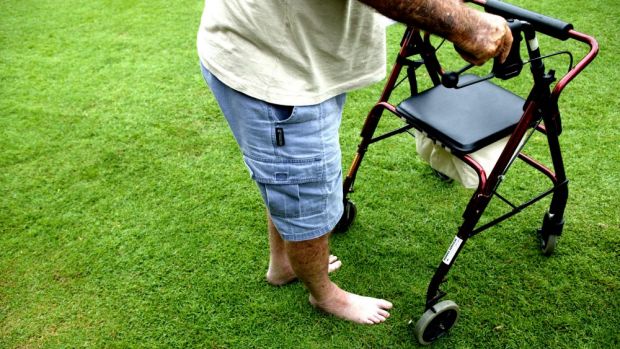 Limiting: The DSP has become even more difficult to get, and the availability of jobs for people with disabilities has become harder. Photo: AFR

Scott Morrison, the new Minister for Social Security says that “getting as many Australians as are able off welfare and into work will be one of my core goals.”

Given both his track record of harsh penalties for those seeking asylum, and the Abbott government’s existing welfare review, the new year for many people with disabilities is looking grim.

Despite the tabloid rhetoric about rorters and bludgers, the rate of people getting the Disability Support Pension (DSP) is falling, with more than half the applications refused. The eligibility criteria have been repeatedly tightened, and the work threshold is now only 15 hours a week. The DSP also recognises that having a disability costs money – for example, if local public transport is not accessible, a taxi may be the only transport alternative. This financial cost has nothing to do with whether a person is on the DSP or another safety net payment; it’s because having a disability is expensive.

I started on the DSP nearly two decades ago. I’d never thought of myself as disabled, or knew of the DSP, but after my fourth hospital admission in 18 months, the hospital social worker sat down next to my bed and showed me the forms. She knew, as did my medical team, that I was struggling. I couldn’t afford all the medication I needed, and most of my meagre income from the small amount of casual work I could do went to cover the rent, leaving little left for bills and food.

The DSP changed my life. Immediately, I had enough money to pay for medication, that was much cheaper. I had money each week to eat more nutritious food and even occasionally go to a movie or see a band, like my non-disabled peers. I could pay to connect the internet so I could finish my university studies and I stopped ending up in hospital so often.

As my health stabilised, I also found regular part-time work that paid better, was more reliable and my employers were prepared to make the adaptations I needed. The amount of DSP I received dropped as my wages grew – often down to $50 a fortnight. When I got sick again and had to stop work, which was the pattern of my disability for the next decade, the DSP was there to catch me, so I could pay my rent and afford bills, food and medication. Because I worked at all, I was subject to regular stringent reviews of my eligibility that were stressful and difficult – each time, the verdict was the same. I was still sick, but had found flexible work at the limit of my capabilities.

I finally got off the DSP, not due to any magical policy change by the government, but because science found better medications to treat my disease. I could work full-time for the first time in years due to the part-time work and DSP support I’d had while being sick. If the current harsh DSP rules had applied, I would have become well again with a decade lost from work and study, making getting back to full-time employment even further out of reach.

Since then, the DSP has become even more difficult to get, and the availability of jobs for people with disabilities has become harder. Instead of being a support payment that encourages people to work, the DSP in its current form actively discourages anyone with a disability to move in and out of work as I did.

If I was still on the DSP, and tried working two to three days a week, then my illness relapsed, or I lost my job, I would be forced onto Newstart which is so low that it doesn’t even cover rent, let alone recognise the extra costs of having a disability. What kind of incentive is that for people with disabilities to work, particularly for those who have not been in the workforce for some time, or who have episodic illness common to people with a mental illness.

Scaring people is not the way to encourage a significantly vulnerable and disadvantaged community into trying to enter the world of work, particularly when unemployment is rising.

Why not let people dip their toes into work in a supportive and understanding way? How about letting them keep more of their new wages to start addressing the poverty gap for people with disabilities? What about a major campaign for all levels of government and large companies to hire people with disabilities? How about giving the Disability Discrimination Act some enforcement teeth so employers have to make adjustments so workplaces are accessible and discrimination has some actual consequences? Why not settle the case against “supported employment” and commit to award wages for people with disabilities, instead of only a dollar or two an hour?

If the social safety net, there for all of us when bad luck happens becomes even harsher, the only result will be more Australians living in poverty. But then again, maybe that’s exactly what this government intends.

El Gibbs is a freelance writer who specialises in the area of disability and social services.