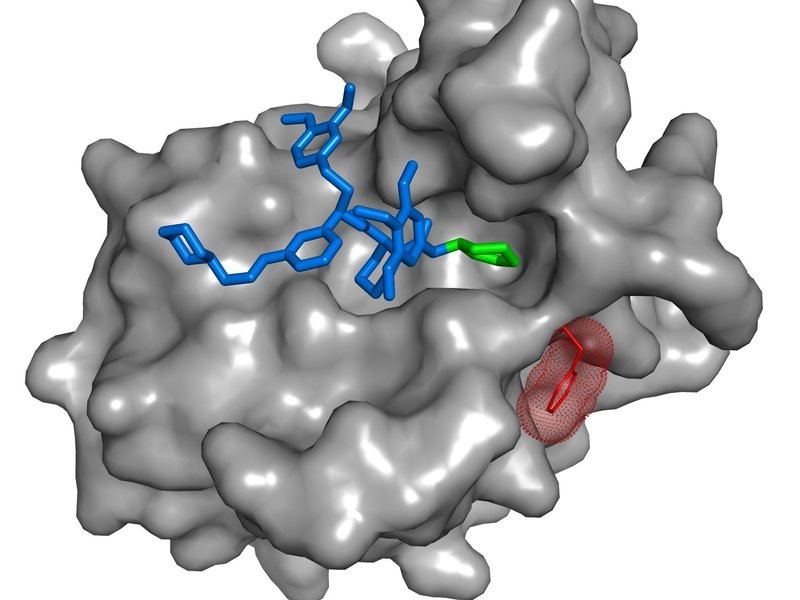 The SAFit-ligand (blue/green) is a highly selective inhibitor of FKBP51 (grey), a risk factor for stress-related psychiatric disorders. The binding of SAFit induces a conformational change (red protein side chain) in FKBP51, but not in its very similar functional counterplayer FKBP52.
Credit: © MPI of Psychiatry / Felix Hausch

The FK506-binding protein 51 (FKBP51) is an established risk factor for stress-related psychiatric disorders such as major depression. Drug discovery for FKBP51 has been hampered by the inability to pharmacologically differentiate against the very similar functional counterplayer FKBP52. Scientists at the Max Planck Institute of Psychiatry in Munich have now developed the first potent and highly selective inhibitor of FKBP51. The so-called SAFit-ligand inhibits FKBP51 enhancing growth of neuronal cell cultures and improving stress-coping behavior in mice. These findings provide the structural and functional basis for the development of mechanistically novel antidepressants.

FKBP51 and FKBP52 are proteins which regulate multiple cellular activities. Most importantly in the context of psychiatric diseases, they interact in an antagonistic manner with receptors for stress hormones in the brain. FKBP51 inhibits while FKBP52 enhances the activity of the glucocorticoid receptor, thus playing a major role in the regulation of stress responses.

For the first time, scientists around Felix Hausch, Project Group Leader at the Max Planck Institute of Psychiatry and lecturer at the Ludwig-Maximilians-Universityin Munich, developed highly selective inhibitors of FKBP51 by an induced-fit mechanism. “We initially used a chemical genetics approach and then, step by step, improved the fitting of our inhibitors,” describes Steffen Gaali, post-doctoral student in the project group of Felix Hausch and first author of the current study. “Finally the most potent ligand SAFit, a selective Antagonist of FKBP51 by induced fit, had a more than 10,000-fold selectivity for FKBP51 over FKBP52.” SAFit exactly fits into a pocket of FKBP51 by pushing out one of the protein’s amino acid side chains. This conformational change cannot occur in the FKBP52 protein.

In further experiments, the researchers investigated the characteristics and effects of the SAFit-ligand. In cell culture, SAFit potently stimulated the differentiation of neuronal cell lines. Unlike former inhibitors of FKBP51, the new pharmacological agent did not show any immunosuppressive side-effects. Further, SAFit displayed antidepressant-like activity in mice. By inhibiting FKBP51, the protein’s inhibitory effect on the glucocorticoid receptor is reduced in the brain. Thus, SAFit enhances the regulation of one of the key stress-coping mechanisms, the HPA axis.

“Depression is likely a biologically heterogeneous disease and a major shortcoming is the inability to match antidepressant agents to the specific underlying biological alterations,” explains Felix Hausch. “Patients with FKBP51-hyperinducing gene variants or with a hyperactive HPA axis can be clinically identified by genotyping for FKBP51 and/or the Dex-CRF test.” Taken together, by generating the SAFit-inhibitor, the Max Planck scientists provide the proof-of-principle for selective FKBP51 inhibitors as a mechanistically novel treatment for stress-related psychiatric disorders.

The hypothalamic-pituitary-adrenal axis (HPA axis) is a complex set of interactions among the hypothalamus, the pituitary gland and the adrenal glands. The interactions among these organs play a major role in the control of reactions to stress and regulate many processes, including digestion, the immune system, mood or emotions. The stress-induced release of corticotropin-releasing factor (CRF) by the hypothalamus leads to increased cortisol production in the adrenal glands. Cortisol itself facilitates an adaptive phase in which alarm reactions including the immune response are suppressed, allowing the body to attempt countermeasures against the stress.

The above story is based on materials provided by Max-Planck-Gesellschaft. Note: Materials may be edited for content and length.

Antidepressants have sexual side effects in teens, too 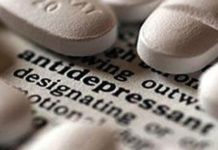 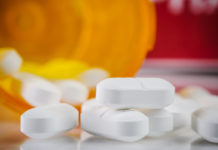