The quest to build a bionic eye in Australia has received a $3 million boost, allowing the ambitious project to reach human trials next year.

Monash Vision Group announced on Tuesday the respective foundations of businessman Marc Besen and the university’s Chancellor Alan Finkel had each given $1 million.

The university matched the commitment, promising another $1 million for the project.

“This comes at a very good time as it will get us to human trials just as the Australian Research Council funding comes to an end,” Monash Vision Group director Arthur Lowery said.

“It means we can keep the team together and the expertise and know-how which is so critical to high-tech projects.”

Professor Lowery, who also heads Monash’s electrical and computer systems engineering, said to date the project had run at a cost of about $2.5 million a year.

However he said that would change as the research moved from the engineering phase to clinical trials.

More than 500,000 Australians are considered clinically blind. Many of them have damaged optical nerves, which prevent signals from reaching the brain.

The Monash Vision Group, a collaboration between Monash University, Alfred Health, MiniFAB and Grey Innovation, is building a bionic eye which aims to restore sight by transmitting wireless signals directly to an implant in the brain, bypassing the eye.

Dr Finkel said this approach was exciting, given its broad relevance to a range of conditions resulting in vision loss.

“I find the project absolutely fascinating,” Dr Finkel said. “It’s potentially capable of picking up a broader number of people who are totally blind because it includes not just those who have lost their vision at the retina but at the optical nerves as well.”

While Monash is working on an implant to stimulate the visual cortex within the brain, the other Australian group, Bionic Vision Australia, is working on a microchip to be inserted into the retina of vision-impaired patients.

Both groups have received federal funding. However as it comes to an end, each are having to turn to private investors before they launch their devices in the commercial world.

Dr Finkel added that he remained optimistic that the Abbott government’s Medical Research Future Fund would go ahead and support such projects transition from the laboratory to the business world.

The two Australian bionic eye projects were launched in 2009 after the Rudd government announced $50 million to develop a functional bionic eye. 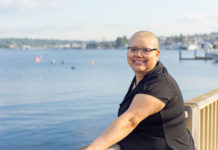 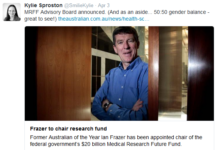 Where to in medical research? Ian Frazer heads advisory board for Medical Research Future Fund