Upheaval and uncertainty are the distinguishing characteristics of the Abbott Government’s efforts in health and related portfolios.

The Government’s plans for a GP copayment appear to be on hold while Minister Peter Dutton has confirmed receiving legal advice that it cannot be implemented via regulation, and that legislation would be needed.

The chaos in Indigenous funding (see this report by Amy McQuire, for example) must be having some adverse effects upon the health and wellbeing of people, communities and organisations.

Today the Senate voted against the bill abolishing the Australian National Preventive Health Agency (33 ayes to 34 noes), although as journalist Michael Woodhead points out, this seems somewhat symbolic given that the Agency has already shut up shop.

Meanwhile, there are questions about the future of the John Flynn Placement Program, established in 1997 as “an important part of the Australian Government’s strategy to attract more doctors to rural and remote areas to address areas of workforce shortage and improve the quality of healthcare for local communities”.

Each year, 300 students selected to join the program are placed with a rural doctor for a minimum of two weeks annually, normally over a four-year period, visiting the same community each year.  An evaluation published in 2011 found the program has a positive impact upon students’ intentions to work rurally.

But the future of the program is now in doubt, according to the letter below from the Australian College of Rural and Remote Medicine, which administers it on behalf of the Government. (Click on image below for bigger text). 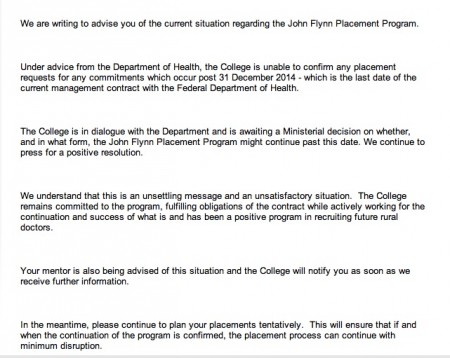 (This letter has been altered to obscure the identity of the recipient.) 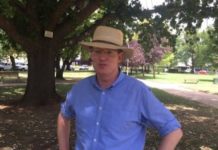