BAMAKO (Reuters) – Mali said on Monday that another person had tested positive for the Ebola virus, bringing the total number of cases in the West African nation to eight.

Mali is the sixth West African country to be hit by the worst outbreak on record of deadly haemorrhagic fever that has killed some 5,459 since the first case was recorded early this year in neighboring Guinea.

The Malian government did not provide further details about the new case and how the person contracted the disease, but it came after another case was confirmed on Saturday.

It said both cases were at an Ebola treatment center.

The government said in a situation report that 271 people who may have come in contact with Ebola cases were being monitored.

Of the six previously known cases of the disease in Mali, all have died, the World Health Organization said on Friday. 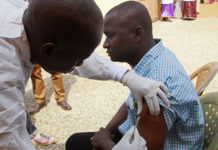 Liberia on alert as three new Ebola cases are confirmed