A company which provides medical services in the far west has been delayed in its attempts to send workers to Africa to help treat Ebola.

In October, medical company Ochre Health called for doctors and nurses with experience in remote communities in western New South Wales to go to Freetown in Sierra Leone for nine weeks, on behalf of charity Save the Children.

At least four doctors and 16 nurses were scheduled to leave Australia this month after a week’s training.

However, Ochre Health’s Hamish Meldrum said the company delayed its recruitment process until medical company, Aspen, was officially contracted by the federal government to run the Ebola effort on behalf of Australia.

“It’s now up to Aspen to screen them and train them and deploy them,” he said.

Ochre’s first doctor is due to begin training this week.

“The doctor is a locum doctor, they’re been based in Melbourne,” said Dr Meldrum.

“They’ve been coming out to Collarenebri to do regular locums and they’ve put their hand up to go to Sierra Leone and they’ve been accepted by Aspen.”

An Aspen spokesperson said training will go for two weeks and will involve training in hardcore clinical practice as well as in the cultural and social aspects of Sierra Leone.

“We’ve got interest from 3 or 4 doctors that we think are seriously interested, he said.

“We think our doctors, they’re generalists, they’ve got hospital skills, and they’ve got GP skills. 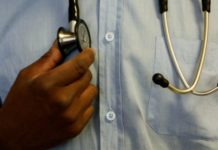