CONAKRY, Guinea — It was a highway robbery but the bandits got more than they bargained for when they stopped a taxi van in Guinea and made off with blood samples that are believed to be infected with the deadly Ebola virus.

Authorities publicly appealed on national radio Friday to the unidentified robbers to hand over the samples that were stolen from the minibus taxi during its 265-kilometer (165-mile) trek from central Kankan prefecture to a test site in southern Gueckedou.

Four Red Cross officials accompanied the samples, that were drawn from a single person and stored in a sealed container, when armed bandits stopped the vehicle the aid group had commissioned near the town of Kissidougou, said Faya Etienne Tolno, a press officer for the Guinea Red Cross.

The theft underscores how hazards abound and hiccups remain in the aid response, despite millions of dollars’ worth of international support pouring into West Africa to fight a virus now responsible for more than 5,000 deaths.

Tolno explained that the Guinea Red Cross did not have its own vehicles for transport, which explains why a taxi was commissioned.

“We don’t understand why they stole the blood sample. Perhaps they thought there was cash hidden in the flask,” Tolno said.

Dr. Barry Moumie, who heads patient care for the national Ebola response coordination committee, told The Associated Press: “We have informed the security services. If these thieves handle this blood, it will be dangerous.”

“I can assure you, however, that the sample-transportation procedures will now be strengthened to avoid such disappointments,” he said.

Ebola, which has killed more than 5,000 people in Liberia, Sierra Leone and Guinea, is spread primarily by contact with infected bodily fluids including blood, feces and vomit. 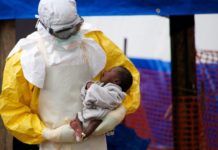 Guinea, where Ebola chain of transmission began, is declared free of the virus