A study just released by Columbia University’s Mailman School of Public Health found that children who were exposed to antibiotics in the second or third trimester of pregnancy had a higher risk of childhood obesity at age 7. The research also showed that for mothers who delivered their babies by a Caesarean section, whether elective or non-elective, there was a higher risk for obesity in their offspring. Study findings are published online in the International Journal of Obesity.

Although previous studies have shown that antibiotics administered early in life may be associated with increased risk of obesity in childhood, this is the first study reporting that maternal antibiotic use in the second or third trimester of pregnancy increases the risk of offspring obesity. Antibiotics affect microbes in the mother and may enter fetal circulation via the placenta. Researchers are beginning to understand that the bacteria that normally inhabit our colon have important roles in maintaining our health and imbalances in these bacterial populations can cause a variety of illnesses. Disturbances in the normal, transmission of bacteria from the mother to the child are thought to place the child at risk for several health conditions, including obesity.

The study is based on data of healthy, non-smoking, pregnant women who were recruited for the Northern Manhattan Mothers and Children Study from prenatal clinics at New York-Presbyterian Hospital and Harlem Hospital Center between 1998 and 2006. Of 727 mothers enrolled in the study, 436 mothers and their children were followed until 7 years of age. Of these 436 children, 16 percent had mothers who used antibiotics in the second or trimester. This work is part of the Columbia Center for Children’s Environmental Health’s efforts to understand how to promote healthy growth and development through out childhood and adolescence.

The children exposed to antibiotics in this timeframe had an 84-percent higher risk of obesity, compared with children who were not exposed.

“Our findings on prenatal antibiotics and risk for offspring obesity are novel, and thus warrant replication in other prospective cohort studies,” said Noel Mueller, PhD, postdoctoral research fellow at Columbia University’s Mailman School of Public Health and Institute of Human Nutrition. “If these findings hold up, they suggest new mechanisms through which childhood growth trajectories are influenced at the earliest stages of development. Our findings should not discourage antibiotic use when they are medically needed, but it is important to recognize that antibiotics are currently overprescribed.”

“Our findings are consistent with a series of papers that looked at data on Caesarean section. While earlier studies suggested that childhood outcomes differ by whether the Caesarean section was elective or non-elective, we did not observe such evidence,” said Andrew Rundle, DrPH, associate professor of Epidemiology at the Mailman School of Public Health. “Thus, our findings provide new evidence in support of the hypothesis that Caesarean section independently contributes to the risk of childhood obesity.”

Similar to antibiotic use during pregnancy, Caesarean section birth is thought to reduce the normal transmission of bacteria from the mother to the child and to disturb the balance of bacteria in the child. “Strategies to reduce medically unnecessary C-sections and to provide the infant with health promoting bacteria after C-section need to be researched,” noted Dr. Mueller.

“Further research is needed on how mode of delivery, antibiotic use during pregnancy and other factors influence the establishment of the ecosystem of bacteria that inhabit each of us,” said Dr. Rundle. “This research will help us understand how to create an early platform to support the healthy growth and development of children.”

The above story is based on materials provided by Columbia University’s Mailman School of Public Health. Note: Materials may be edited for content and length. 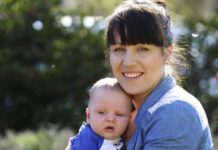