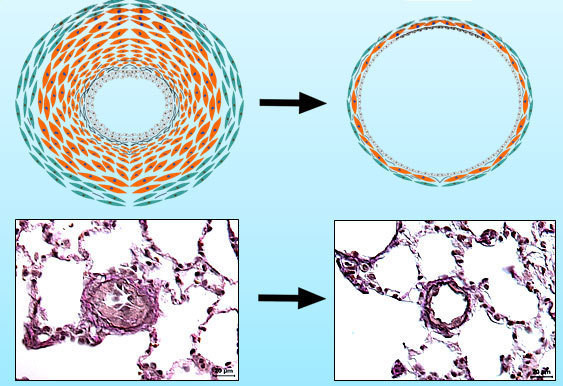 FoxO1 halts unrestrained cell division in pulmonary arteries. The images show photomicrographs of pulmonary arteries of rats with pulmonary hypertension. Whereas the blood vessel of an untreated rat is drastically reduced in diameter (left image), the vessel wall is essentially normalized after activation of FoxO1 (right).
Credit: Image courtesy of Max-Planck-Gesellschaft

Pulmonary hypertension is characterized by uncontrolled division of cells in the blood vessel walls. As a result, the vessel walls become increasingly thick. Scientists at the Max Planck Institute for Heart and Lung Research in Bad Nauheim and Giessen University have discovered that transcription factor FoxO1 regulates the division of cells and plays a key role in the development of pulmonary hypertension. The researchers were able to cure pulmonary hypertension in rats by activating FoxO1. The study findings could be used to develop a new treatment for this hitherto incurable disease.

An estimated 100 million people worldwide suffer from pulmonary hypertension. The disease is characterised by progressive narrowing of the pulmonary arteries. The reduced diameter of the vessels leads to poor perfusion. The right ventricle tries to compensate by increasing its pumping action. This, in turn, increases the blood pressure in the pulmonary arteries. In the course of time, chronic overload damages the heart. The result is cardiac insufficiency, also known as congestive heart failure.

Several forms of treatment developed in recent years aim mainly to alleviate the symptoms and relieve strain on the heart. Pulmonary hypertension, however, is still incurable, not least of all due to insufficient knowledge of what causes the disease at the molecular level.

Scientists at the Max Planck Institute for Heart and Lung Research in Bad Nauheim and Justus-Liebig University in Giessen have now achieved a major advance. In transcription factor FoxO1 they have identified a key molecule that plays a decisive role in the regulation of cell division in vascular wall cells and the lifespan of the cells. “The vessel walls of pulmonary arteries are constantly being renewed. A complex interplay of many factors normally ensures that the ratio between dividing and dying cells is balanced,” explains Soni Savai Pullamsetti, who headed the research project.

The researchers found an important clue about the central role of FoxO1 in tissue samples from pulmonary hypertension patients: “In these patients, FoxO1 is not sufficiently active, so that the activity of various genes is not properly controlled,” says Pullamsetti. Experiments on cell cultures and rats have confirmed the results: If we switch off FoxO1 by means of genetic or pharmacological intervention, the vascular wall cells divide more frequently,” says Rajkumar Savai, lead author of the study. Consequently, pulmonary hypertension develops.

Reduced FoxO1 activity is therefore an important factor in the development of pulmonary hypertension. In further experiments it was found that certain growth factors and chemical messengers are responsible for reduced FoxO1 activity. These are substances that are either generally associated with inflammatory processes or that stimulate cell division.

“A potential new form of therapy could focus on increasing the activity of FoxO1 in the pulmonary arteries of patients,” states Werner Seeger, department head at the Max Planck Institute in Bad Nauheim and director of Medical Unit II at Giessen University Hospital. This has already been demonstrated in experimental studies. Accordingly, pathological cell division in pulmonary vessel walls normalized when the researchers boosted FoxO1 activity. “Rats suffering from pulmonary hypertension were essentially cured,” says Seeger. Based on these positive findings, the scientists are optimistic that the study findings can be used to develop a novel therapeutic approach.

The above story is based on materials provided by Max-Planck-Gesellschaft. Note: Materials may be edited for content and length.

Unlocking the secrets of pulmonary hypertension