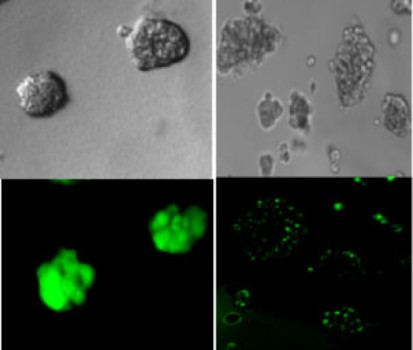 Bacteria molecule kills cancer cells: Cancer cells on the left are pre-molecule treatment. The cells on the right are after the treatment and are dead.
Credit: Image courtesy of University of Missouri-Columbia

Cancer, while always dangerous, truly becomes life-threatening when cancer cells begin to spread to different areas throughout the body. Now, researchers at the University of Missouri have discovered that a molecule used as a communication system by bacteria can be manipulated to prevent cancer cells from spreading. Senthil Kumar, an assistant research professor and assistant director of the Comparative Oncology and Epigenetics Laboratory at the MU College of Veterinary Medicine, says this communication system can be used to “tell” cancer cells how to act, or even to die on command.

“During an infection, bacteria release molecules which allow them to ‘talk’ to each other,” said Kumar, the lead author of the study. “Depending on the type of molecule released, the signal will tell other bacteria to multiply, escape the immune system or even stop spreading. We found that if we introduce the ‘stop spreading’ bacteria molecule to cancer cells, those cells will not only stop spreading; they will begin to die as well.”

In the study published in PLOS ONE, Kumar, and co-author Jeffrey Bryan, an associate professor in the MU College of Veterinary Medicine, treated human pancreatic cancer cells grown in culture with bacterial communication molecules, known as ODDHSL. After the treatment, the pancreatic cancer cells stopped multiplying, failed to migrate and began to die.

Kumar says the next step in his research is to find a more efficient way to introduce the molecules to the cancer cells before animal and human testing can take place.

“Our biggest challenge right now is to find a way to introduce these molecules in an effective way,” Kumar said. “At this time, we only are able to treat cancer cells with this molecule in a laboratory setting. We are now working on a better method which will allow us to treat animals with cancer to see if this therapy is truly effective. The early-stage results of this research are promising. If additional studies, including animal studies, are successful then the next step would be translating this application into clinics.”

The above story is based on materials provided by University of Missouri-Columbia. Note: Materials may be edited for content and length.