Formerly bustling streets and markets across Sierra Leone went empty Friday, as the country began its three-day lockdown to curb the spread of Ebola.

Authorities in Sierra Leone are requiring the country’s 6 million residents to stay indoors, as they enact new measures to fight the deadly disease, which has killed more than 2,600 people in West Africa.

According to CNN, 7,000 health workers will go door to door in cities across Sierra Leone to distribute 1.5 million bars of soap, educate the public on Ebola prevention and seek out unknown cases of the illness.

Officials have struggled to treat and maintain the outbreak amid misinformation and paranoia. Many locals believe those who are there to help are actually bringing the disease, causing the infected to remain in hiding. Officials expect to find hundreds of diseased people who have yet to be diagnosed with Ebola in this week’s search.

People appeared to be complying with the lockdown on its first day, according to BBC correspondent Umaru Fofanasaid. He said in the usually busy capital of Freetown, “the streets are completely deserted.”

3-day lockdown in Sierra Leone 2 stem #Ebola spread starts with a bang. Total compliance. Driven across Freetown only the authorised r out.

Others in Freetown posted photos of the empty streets.

The idea of 3 day ‘stay home to stop #Ebola in #SierraLeone‘ reminds me of Cleaning Days in Kenema. Empty streets. pic.twitter.com/6eMihBUNRb

The quarantine comes one day after the United Nations Security Council called the deadly epidemic “a threat to international peace and security,” and called for global action.

Kent Brantly, an American doctor who survived Ebola after contracting the disease in Liberia, also made a plea for action this week. He testified before the U.S. Senate on Tuesday, saying “We can’t afford to wait months, or even weeks, to take action, to put people on the ground.”

Researchers say at the present rate of infection, there could be 20,000 total cases of Ebola before the outbreak is brought under control, according to the Times. 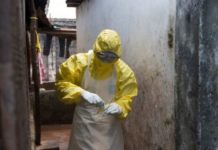