A STUDY of 47 participants found those who used a commercially available diet application for their smartphones gained an advantage over those using traditional methods of tracking food consumption and exercise patterns.

Researchers with Arizona State University said that although smartphone use did not affect total weight loss among the participants, those using their devices displayed the best diet tracking results. Lead author Christopher Wharton said: “Participants using a commercially available app more consistently entered complete days of dietary data compared with the paper-and-pencil group and also withdrew from the study less often than the other groups. “It’s possible that app technology offers a less burdensome method for tracking data compared with traditional tools.” The memo and paper-and-pencil groups of participants reported twice the number of missing days as the group using the app, but diet quality was not improved among app users. Researchers said it was concluded that food and nutrition professionals should consider using app technology in conjunction with dietary counselling for weight management. An estimated 83 per cent of Americans own a mobile phone and 45 per cent own smartphones with internet access. For this study, researchers recruited healthy, weight-stable adults and semi-randomly divided them into groups based on their diet-tracking method. 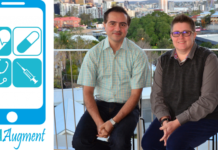