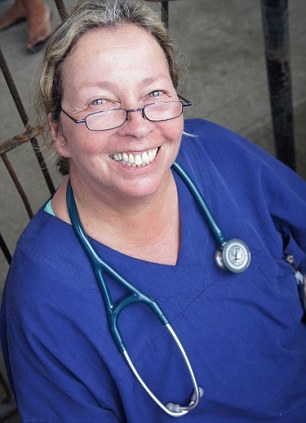 Dr Jenny Stedmon, an anaethestist from Brisbane will be the third Australian doctor to join the fight against the deadly Ebola outbreak. On Saturday Dr Stedmon will join 1,500 Red Cross volunteers in Sierra Leone.

Dr Jenny Stedmon, said she feels prepared to join a team of international physicians and nursing staff in Sierra Leone and believes it is treatable if detected early.

Dr Stedman, who leaves for West Africa on Saturday, admitted that she’s hesitant about coming into contact with the disease and the sufferers, but says it’s a ‘normal response’.

‘I’m sensitively precautious of course, and I am well aware that this is a nasty disease but there are so many positive stories coming out at the moment – I’m talking about people surviving on the ground.

‘There is a pregnant lady there who is currently getting treatment and shows signs of surviving.  So I think we are likely to see more positive stories and more control of the virus.’

But her husband Jim and friends of hers were not so quick to jump on her humanitarian bandwagon.

‘Initially my husband wasn’t that thrilled about me going over there and some of my friends thought I was crazy,’ she said.

As time draws closer to her departure the people around Dr Stedmon have became more supportive and understand her need to go to West Africa and treat the local areas affected.

‘My husband has been my biggest supporter, she said. ‘People now understand that there is a serious problem in West Africa and we are a part of the need to help and partially responsible.’

Dr Stedmon will be a medical officer on the ground and will be treating patients who suffer form dehydration, providing fluid, medical management and general care to those affected.

The Red Cross will provide protective clothing and equipment to Dr Stedmon and the other aid workers and they will be in quarantine for 3 weeks afterwards as part of usual precautions.

This type of missionary work is not foreign to the clinical director of anaesthesia at Redlands Hospital.  Dr Stedmon has worked in 4-5 different war zones, including in Yemen, on the Thai-Cambodian border and during the typhoon in the Philippines last year.

‘I have lived and worked in difficult conditions so i know what to expect.

‘I expect that it will be well organised with good training on the ground and rapidly supporting the local services of West Africa.’

Along with her experience working as a medical missionary, Dr Stedmon is familiar with Africa from childhood. Her parents were teachers in Nigeria and she has previously worked on the border of Kenya and Sudan.

Metro South Health has wished Dr Jenny Stedmon safe travels as she flies to Sierra Leone in west Africa to help with the Ebola virus outbreak.

Redland Hospital Director of Medical Services Dr Rosalind Crawford told Daily Mail Australia that ‘Metro South Health is proud to be able to support Dr Stedmon to participate in the International Red Cross response to the Ebola crisis in Africa.

‘We are all very proud of her and the challenging mission on which she is set to embark.’

Dr Stedmond plans on spending her last night in Australia with her husband, going for dinner and finishing her last minute packing.