FREETOWN, Sierra Leone — A second leading Sierra Leone doctor has succumbed to the Ebola epidemic sweeping across West Africa, dealing another blow to the country’s faltering efforts to stem the disease.

Dr. Modupeh Cole, 56, died Wednesday at the Ebola treatment center operated by Doctors Without Borders in the northeastern town of Kailahun, officials at the health ministry said.

He had apparently been infected while seeing a patient at the country’s leading hospital, Connaught Hospital, here in the capital, officials said. The patient later tested positive for Ebola.

The loss of Dr. Cole was described as significant by health officials in a country with a severe shortage of well-trained doctors, especially coming two weeks after the death of Dr. Sheik Humarr Khan, the virologist who was leading the fight against the disease in eastern Sierra Leone, where it has flourished.

Dr. Cole “was a highly qualified physician, and we have very few of them on hand,” said Dr. Amara Jambai, director of prevention and control at the health ministry. “You can imagine what this does to the younger cohort. It’s like having a general falling in battle. It just brings more misery. It’s not good. When you have a health system that’s constrained, it’s a bit too much.” 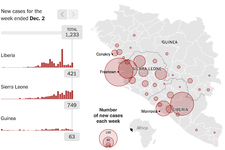 Graphic | How Many Ebola Patients Have Been Treated Outside of Africa? Questions and answers on the scale of the outbreak and the science of the Ebola virus.

Connaught, where Dr. Cole worked, is Sierra Leone’s leading referral hospital, so Ebola patients inevitably go there, initially at least. But it does not have a treatment center for them or an isolation ward.

Dr. Cole trained in the Soviet Union in the 1980s before returning to Sierra Leone in 1987, Dr. Jambai said.

The disease continues to spread, with the World Health Organization reporting 1,013 deaths across four countries — Guinea, Liberia, Nigeria, and Sierra Leone — as of Saturday. Sierra Leone reported the most confirmed and probable cases, 730, and the third-highest death toll, 315. Health workers suspect that this figure may be far too low, given the number of confirmed Ebola cases in the country, 656.

On Tuesday, some of the rare experimental Ebola drug known as ZMapp arrived in Liberia. The minister of foreign affairs, Augustine Ngafuan, transported three courses of the drug himself on a commercial flight from the United States. The Liberian government had announced that two courses would be administered to two doctors from John F. Kennedy Medical Center in Monrovia, the Liberian capital. 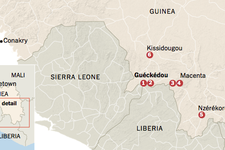 Interactive Feature | How Ebola Spread A report in The New England Journal of Medicine traces the spread of the recent Ebola outbreak from Guéckédou, Guinea, to towns nearby.

But Dr. Moses Massaquoi, a health ministry official, said in a telephone interview that “things have changed,” adding that the medication would be administered to health workers, among them a doctor and a nurse, without specifying. Health officials also emphasized that the very limited courses of the medication, which is unproven and virtually untested, were not a panacea.

“For me this is not the answer; it’s just a matter of trial,” said Tolbert Nyenswah, the assistant minister of health. “We need to continue mechanisms to break transmission so that we can eradicate this disease.”

A third death in Nigeria was reported by the Economic Community of West African States, a regional bloc, which said Tuesday that Jatto Asihu Abdulqudir, a staff member in Lagos, had succumbed to the disease. Mr. Abdulqudir was among those who assisted an infected Liberian-American who had arrived by plane for a conference in July. The passenger, Patrick Sawyer, died on July 25, and a nurse who treated him died shortly after.

Nigerian media reported Wednesday that officials were concerned about the spread of the disease beyond Lagos, with 21 people being placed under quarantine in the southeastern city of Enugu. They were reported to have had contact with a nurse who treated Mr. Sawyer.

In Nigeria, the outbreak still appears relatively contained, with 10 confirmed cases and 198 people being watched in Lagos and Enugu, according to Liberian media reports. In Sierra Leone, by contrast, a substantial portion of the nation is under quarantine by the government, and the number of cases, and deaths, keeps growing.

“When figures have names, that is when reality sinks in,” Dr. Jambai said. “It’s a very sad day.”