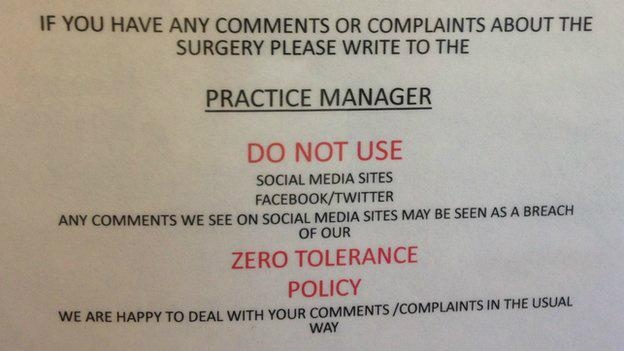 Patients at a GP surgery in Essex have been told not to post their comments or complaints on social media.

The request was made after staff saw patients using “appalling language” to describe the surgery on a local newspaper’s Facebook page.

Practice manager Alison Rudkin said the wording of the sign had been changed.

“I admit it wasn’t worded well originally, so we have amended it and added another line at the bottom,” she told BBC News.

“It now says: ‘This ensures we can respond to people’s concerns with patient confidentiality in mind.'”

It said it did “not tolerate rude, abusive or aggressive behaviour, in any form, to any member of our staff.”

Ms Rudkin said online comments about the surgery, which mentioned staff by name and used swearwords, had prompted the decision to put up the sign.

“Those sort of comments and that sort of language is a form of bullying,” Ms Rudkin said.

“We would much rather people come and see us in person if they have something they want to say.

“We can’t respond to people properly if they choose to make their comments on Facebook or Twitter,” she added.

The Mid Essex Clinical Commissioning Group could not be reached for a comment.