PARAMEDICS have labelled the unprecedented ambulance ramping at the Royal Adelaide Hospital as “a complete shambles”.

Ambulance paramedics were forced to treat patients in ambulances queued in the RAH carpark from 10pm as temperatures plummeted on Sunday night when the overloaded hospital implemented a new plan blocking access.

The RAH used the final phase of an action plan it has developed in the past six weeks as other overcrowded hospitals diverted ambulances to the RAH.

“Phase Four” of the plan was triggered after earlier moves to open new areas and call in extra staff failed to cope with demand.

It involved staggering patient arrivals, as a mix of seasonal ills and an outbreak of norovirus closed beds at Flinders Medical Centre.

Ambulance Employees Association state secretary Phil Palmer described the situation as “a complete shambles” which put patients lives at risk and prevented ambulances from being ready to answer emergency calls.

“We are appalled at the recklessness of this action which appears to be the action of individuals trying to make a point,” he said.

“They barricaded the doors and would not let ambulance staff in with patients — it was a complete shambles.

“There were at least five ambulances involved in freezing conditions. While paramedics can give good clinical care in ambulances, this irresponsible action meant paramedics were in effect stuck treating hospital patients instead of being available to the rest of the community in the event of an accident or other health emergencies.”

Mr Palmer met with officials from the SA Ambulance Service over the incident.

He warned the State Government and SA Health further ramping at the hospital could escalate into an industrial dispute.

“This was absolutely irresponsible and created a dangerous situation,” he said.

“It is clear the health system is under pressure as every hospital at the time was over capacity and diverting ambulances to the RAH.”

Mr Palmer said it was believed to be the first time the RAH had been subject to ambulance ramping, as the flagship hospital is regarded as the hospital of last resort when all other hospitals are full.

The ramping continued for more than two hours with patients treated in ambulances by paramedics and RAH staff.

Prof Hughes said the plan worked well and was the safest option under the circumstances. He said no critically ill patients were left to be treated outside.

“It got to a stage the department was very full, we have an internal escalation plan we have been piloting for past few weeks and we implemented that plan,” he said.

“It was safer than not doing what we did. It is the first time we have had to implement Phase Four and it went very smoothly.”

Health Minister Jack Snelling rejected the suggestion the health system was buckling under demand but warned of regular ramping at the RAH unless the Federal Government reversed its health funding cuts.

“What is the state health system going to look like when $655 million is ripped out over the next four years?” Mr Snelling said 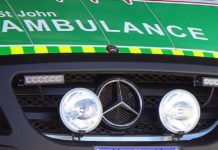