Well-wishers have raised nearly $100,000 (£59,000) for a baby reportedly left with his surrogate Thai mother after his Australian parents discovered he had Down’s syndrome and returned home with his healthy twin sister.

Pattaramon Chanbua from Chonburi province, south-east of Bangkok, agreed via an agent to be a surrogate for the couple for a fee of Aus$16,000 (£8,850), giving birth to twins – a boy and a girl – in December.

But when the Australians discovered the boy, named Gammy by his surrogate family, had Down’s Syndrome they abandoned him in Thailand and returned to Australia with only the girl, Australia’s ABC said.

“The money that was offered was a lot for me. In my mind, with that money, one, we can educate my children, two, we can repay our debt,” said Pattaramon, already a mother to two children, in an interview with the broadcaster in Chonburi.

But instead the 21-year-old was left to care for the boy, who also has a life-threatening heart condition requiring expensive treatment she cannot afford.

“I don’t know what to do. I chose to have him… I love him, he was in my tummy for nine months,” she said.

Pattaramon has never met Gammy’s Australian parents, according to Thai newspaper Thairath, which broke the story of Gammy last week, and their identities remain unknown.

“They (the surrogacy agency) told me to carry a baby for a family that does not have children… They said it would be a baby in a tube,” she said.

A spokesman for Australia’s foreign affairs department told AFP Canberra was “concerned” by the reports and was in consultation with Thai authorities over surrogacy issues.

“The alleged circumstances of the case raise broader legal and other issues relating to surrogacy in Thailand,” he said.

Many foreign couples travel to Thailand, a popular medical tourism hub, to use its in-vitro fertilisation (IVF) services despite the unclear legal situation surrounding surrogacy. Tares Krassanairawiwong, a Thai public health ministry official, said it was illegal to pay for surrogacy in Thailand.

“Surrogacy can be done in Thailand but it has to comply with the laws… A surrogate has to be related to the intended parents and no money can be involved.”

The reports about Gammy’s abandonment have triggered hundreds to donate to a fundraising page created for him last week.

By late Friday the “Hope for Gammy” page had raised more than $98,000. It also carried scores of comments, many of which expressed outrage at the boy’s abandonment by his parents.

“May this selfish and heartless couple be exposed and shamed for this horrible neglect!” said one. 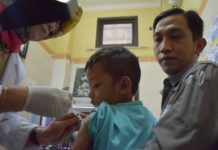