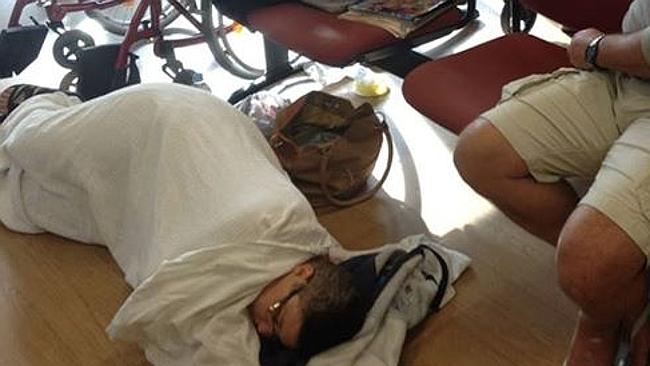 A PHOTO of a terminally ill woman lying on the floor of Gold Coast University Hospital is angering thousands and prompting responses from health authorities.

The photo from the hospital emergency department shows chemotherapy patient Amanda Veitch laying on the floor with a blanket and makeshift pillow and was posted online by her sister Lisa Maree.

“Could they not find some type of bed??? She is full of chemotherapy and at high risk of infection!!,” Lisa Maree wrote in a social media post with the photo, pleading for people to ‘Like’ and share it.

The image first appeared on Facebook on Saturday and has since been shared more than 3800 times after also being posted on other social media pages.

The 30-year-old was diagnosed with cervical cancer six years ago.

It follows an exclusive report on 7News last night revealing a Wynnum heart attack patient was forced to travel 60 kilometres to find a critical care bed because three major intensive care units were full including the PA – where the Premier visited today.

“Going back two to three years ago, this was happening every single day as a matter of course and it doesn’t happen like that anymore,” he said.

“There were multiple traumas here yesterday,” he said.

“That will happen sometimes of course … for a person who’s in the middle of it is a great inconvenience.

“We are sorry for any inconvenience to people but that used to be a daily occurrence.”

Comments are flooding into the Gold Coast Bulletin’s Facebook page in relation to the photo – with some outraged at the situation and blaming lack of Government funding support.

Gold Coast Health, in a statement, said it deeply regretted the circumstances which led to the incident.

A senior staffer for the State Government’s Queensland Health told the Gold Coast Bulletin tonight: “Maybe if so many didn’t ring the ambulance to go to hospital for things they didn’t need to go to hospital for, the emergency department wouldn’t be so full that people who need to be there can get a bed.

“The biggest misconception of the public is if you go by ambulance you get seen quicker but when you arrive at hospital you get triaged just the same as if you went through the front door.

“People go to hospital and call an ambulance because it’s free. The hospital is where the fee needs to be – not at the GP’s,” the staffer added.

“People don’t already go to their GP because it costs money. We’re trained to be an emergency response to life-threatening situations, to save people’s lives, not to attend to bites and people that can’t sleep.”