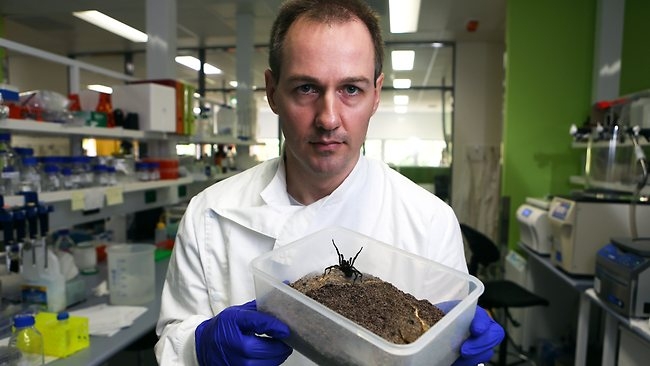 $6.5m project boost for tropical health at Australian Institute of #Tropical #Health and Medicine at @jcu

FIGHTING breast cancer using venom milked from funnel web spiders is just one of the fascinating projects under way at the Australian Institute of Tropical Health and Medicine in Smithfield.

The James Cook University-based facility will soon be in a better position to attract and conduct research after state funding was secured for a new building.

The Queensland Government has pledged $6.5 million for the expansion project, which will also include a refit of some existing research facilities in Cairns, Townsville and the Torres Strait.

is now in the early planning stages for the new building at Smithfield while it awaits confirmation of another $18 million from the Federal Government as part of a $42 million pre-election funding commitment to the AITHM.

Pro Vice-Chancellor Professor Ian Wronski said the project was “an important springboard for the next stage of research development”.

“Our location puts us on Australia’s frontline for biosecurity and health security, ideally placed to tackle issues including the prevalence of tuberculosis in neighbouring Papua New Guinea, as well as dengue fever, chikungunya, Japanese encephalitis and soil-transmitted parasites,” he said.

“These are diseases that have a devastating effect on many developing nations in the tropics and also pose a threat to Australians, given our frequent interactions with neighbouring countries.”

The institute has signed a Memorandum of Understanding with PNG’s Institute for Medical Research, focused on tuberculosis and neglected tropical diseases, and Prof Wronski said the new building would establish Cairns as an AITHM centre.

“Our aim is not just to contribute to better health in the tropics, but also to establish Cairns as one of the centres of Queensland’s knowledge-based economy, by building hi-tech research facilities and continuing to attract world-standard researchers to work here,” he said.

For the past 18 months, he has been exploring the therapeutic value of spider venom components, with a focus on treating breast cancer using toxin molecules.

“We’ve managed to find a compound from the Australian tarantulas, ones around Cairns, that has quite good activity against breast cancer cells, but it’s very early days yet,” he said.

A $6.3 million facility is also proposed for the Torres Strait.