More children, like adults, are undergoing minimally invasive surgery for diseased kidneys, with most of the procedures being performed at teaching hospitals to treat non-cancerous conditions.

Those conclusions were reached in a unique study by researchers at Henry Ford Hospital who set out to fill a knowledge gap about the use of nephrectomy – the surgical removal of a diseased kidney – in the U.S. pediatric population.

Published online in The Journal of Urology, the research findings suggest that as practitioners become more familiar with the techniques of minimally invasive nephrectomy (MIN) in children, it will be used more often to avoid the potential complications of traditional open surgery.

“At the time we began our research project, little was known about the usage of laparoscopic or robotic kidney removal in pediatric patients, although many studies have been done about minimally invasive kidney surgery in adults,” says Jack S. Elder, M.D., Chief of Pediatric Urology at Henry Ford’s Vattikuti Urology Institute and senior author of the study. “As we expected, the use of MIN in children, like in the adult population, is on the rise.”

The researchers studied 27,615 U.S. pediatric kidney patients who underwent MIN or open nephrectomy (ON) between 1998 and 2010. The data was drawn from the Nationwide Inpatient Sample, the only hospital database in the U.S. with charge information on all patients regardless of payer, including those covered by Medicare, Medicaid, private insurance and the uninsured.

“Among adult patients, it can be argued that MIN is the current ‘gold standard’ for renal tumors requiring removal of the kidney,” Dr. Elder says. “As these laparoscopic techniques were being developed, there was a substantial reduction in pain around the time of the operation, as well as decreased blood loss and length of hospital stay after MIN when compared to open surgery.”

Dr. Jesse Sammon, lead author of the study, says his team’s research suggests that while the use of MIN in pediatric kidney patients is increasing, it is not the gold standard for treating children with malignancies because they have smaller open incisions than adults, and therefore suffer less pain and blood loss from the open approach.

“Consequently, there is less incentive for pediatric urologists to adopt the procedure, particularly when treating malignant conditions,” Dr. Sammon says. 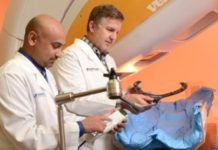